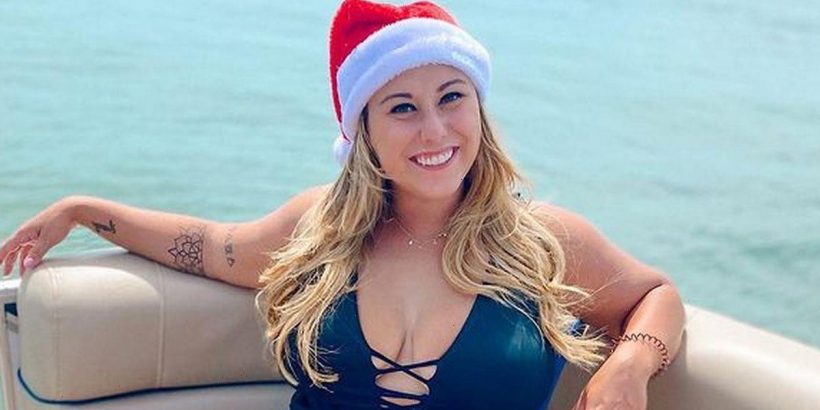 While Eminem's biological daughter Hailie Jade may be his most famous offspring, the rap God is a father to three family members, who are all mentioned in some of his biggest hits.

The Mockingbird rapper's eldest daughter is Alaina Mathers, who he adopted when she was a youngster.

Eminem, whose real name is Marshall Mathers, 50, is the legal guardian of Alaina, 29, after he and ex-wife Kim Scott took her in as a child in the mid-2000s.

As Eminem celebrates his birthday today (October 17) Daily Star looks inside the life of his "forgotten daughter" Alaina after her troubled upbringing.

Alaina, born Amanda Marie Scott on May 3, 1993, is the biological daughter of Eminem's sister-in-law, Dawn, who is also the identical twin of his ex-wife.

The Lose Yourself star opted to help his sister-in-law by adopting the youngster due to Dawn's inability to look after her.

Dawn battled drug addictions and was often caught up in misdemeanours with the police and wasn't able to take full care of her daughter and couldn't rely on the father, who was not in the picture.

In order to ensure the tot had a steady upbringing, Marshall and Kim made the decision to take her in as their own and raise her alongside Hailie, 25.

Despite having one of the most famous dads in the world, Alaina has shown no interest in following a career in the showbiz industry and instead took the academic road.

Alaina studied Public Relations at the University of Oakland and graduated on April 27, 2017, and marked the day with an array of picture-perfect Instagram snaps.

One post saw Alaina posing with a graduation cap, embellished with the words: "1st generation grad. Thanks mom & dad," while another saw her spraying a bottle of champagne in celebration.

Paying homage to her parents, she said: "Can't believe on Saturday I (finally) graduate, none of this would have been possible without the help and love of my parents. Thankful is an understatement."

Nowadays, she can be found sharing glimpses into her personal life but refrains from showing her famous dad on her Instagram profile.

However, she made an exception as she celebrated Father's Day, sharing a picture of Eminem's back as he wore a personalised t-shirt.

Alaina had the rapper pose in the t-shirt which read: "The best kind of father raises an ADP daughter". Alongside the post, she penned: "It's true & I got the best one out there."

She also shared a rare photo alongside her two sisters, Hailie and Whitney, to celebrate Hailie graduating college.

Posing in a striped dress which accentuated her curvaceous figure, Alaina leaned in and planted a kiss on Hailie's cheek who was beaming ear-to-ear while donning the traditional green robes of Michigan State University.

She captioned her post: "So so proud of this babe! Here's to 2 out of 3 girls graduating."

Instead, the blonde beauty shares snaps alongside her long-term boyfriend, Matt Moeller and her adorable dog, Snoop.

She shared a sweet snap of herself dressed in a blue floor-length gown in front of an autumnal background, while Matt put his arm around her in a blue suit.

Alaina and Matt started dating seven years ago in February, and seem to be more in love than ever as she brought in 2021 with him.

The PR grad also treats followers to an array of posts from her travels, showcasing her natural beauty as she poses up a storm from various exotic locations.

She also describes herself as an advocate of "body positivity + women empowering women," and telling her fans that she doesn't filter photos.

She also previously opened up about her colourful family life, as a fan asked her what it was like to grow up with two mums and two dads.

Sharing a picture of herself with her family, including Eminem's daughter Hailie Jade, she said: "I didn't start calling my aunt and uncle mum and dad until I was older but having a meshed family is what's always been normal to me.

"Side note; just because you birth a child or provide the sperm for a child doesn't make you a parent.

"Some people think Mom and Dad titles should be earned.

"I always called my bio Mom and Dad, Mom and Dad but I respect if your "parents" wren't there if you don't call them that.

Sadly, Alaina's biological mum, Dawn, was found dead at her apartment in January 2016 after suffering a heroin overdose.

To distance Alaina from the tragedies in her life, Eminem changed her name upon adoption, although she still goes by her family surname, Scott.

Despite being his adopted daughter, Alaina calls Eminem uncle, which he noted in Mockingbird, saying "Lainey, uncle's crazy ain't he, yeah but he loves you girl and you better know it," with Alaina previously speaking publicly about the 48-year-old as her father figure.

Speaking about his children during a 2004 interview, Eminem told Rolling Stone magazine: "I have full custody of my niece and joint custody of Hailie.

"I was always there for Hailie, and my niece has been a part of my life ever since she was born. Me and Kim pretty much had her, she'd live with us wherever we were at."