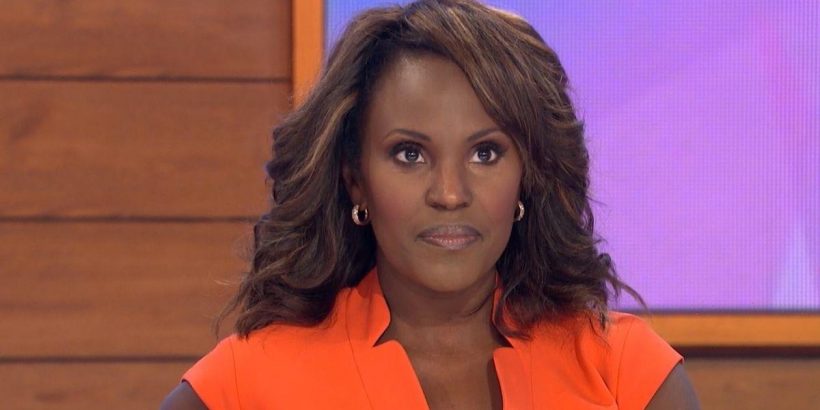 Hollyoaks star Kéllé Bryan has become one of the most recognisable faces on British television.

Singer Kéllé shot to fame back in the early 90s as a member of R&B girl group Eternal alongside her classmate Louise Redknapp.

However, the 46-year-old star is a lady of many talents and she's since gone on to enjoy a wide-ranging career in the world of showbiz – taking on major acting roles and presenting jobs.

The actress joined the cast of Channel 4 soap Hollyoaks in September 2018, where she has been playing the role Martine Deveraux – a role that has recently won her tons of praise for an episode that explored unconscious racial bias.

But fans will also know Kéllé as a regular panelist putting the world to rights on ITV's chat show Loose Women – since joining the show in May 2019.

However, unfortunately, the mum-of-two has also faced some nightmare struggles in her personal life – including a tragic battle with lupus – leading to horror seizures, hair loss, memory failure and more.

Daily Star has taken a look inside the personal life of the brave TV star – from her rise to musical fame to her tense health battles and everything in-between.

Born in Plaistow, Greater London, young Kéllé joined Italia Conti Academy stage school at the age of 11 – where she trained in performing arts and qualified as a dance teacher.

It was here that she met her future bandmate Louise Redknapp – known as Louise Nurding at the time – whom she would eventually form British R&B girl group Eternal with.

Kéllé and Louise went on to form the band with Easther Bennett and her older sister Vernie in 1992 – and the group would soon enjoy huge success, selling over 10million records worldwide.

In fact, Louise had invited Kéllé into the band after joining the record label EMI and being initially recruited by the sisters.

The band released their debut single, Stay, in 1993, and the song reached No4 in the UK charts as well as having success in the States, Australia and Europe.

Their album, Always & Forever, became one of their most successful in 1994 – bagging 1.2million sales in the UK alone.

Sadly though, Louise decided to leave the band before they recorded their second album – as she was "miserable and homesick" – leaving the group "gutted" by her move, according to Vernie.

However, the group carried on as a trio and released their album Power of a Woman – featuring their hit songs, Power of a Woman and I Am Blessed, which the band performed for Pope John Paul II at the Vatican in 1995.

They then bagged their first ever UK No1 with I Wanna Be the Only One – a duet with Bebe Winans.

Unfortunately, Kéllé was reportedly kicked out of the group via a fax from Easther and Vernie's solicitor – citing a "breakdown in professional relations".

"From the outside it just seemed like 'Kelle’s got issues' and 'let’s get on with it ourselves'.

"If only I’d had the balls to march into one of their rooms and go, 'Oi, what’s your problem with me?'

"We would have gone on and sold god knows how many more records. I wasn’t strong enough, I didn’t have the courage. I was too scared."

However, Vernie has refuted Kéllé's telling of the story, claiming it "wasn't a sacking".

Kéllé initially aimed on staying in the music industry, and had begun work on a solo album before she was diagnosed with lupus which forced her to scrap the record.

Easther and Vernie had tried to press on with Eternal as a duo, but the band was hit by low record sales and their last TV performance was in 2000 on Songs of Praise.

Kéllé did reunite with her former Eternal bandmates though – firstly in 2006 with just Easther and again in 2013 with all original members apart from Louise.

More recently there have been whispers that the band will reunite again soon – and Kéllé said on Channel 4's Sunday Brunch last year: "Lou and I speak all the time, which is lovely and our relationship is really great.

"I don’t know if we’d get back together again, but I would say never say never."

She continued: "There had been talks of it just before lockdown. We were talking about it and there were conversations about possibly touring and things like that, but you never know.

"I do have a sneaky suspicion that something might come off at some point."

Kéllé was diagnosed with lupus – an autoimmune disease which causes the body to mistakenly attack the body's healthy cells – in 1998.

She began to suffer heavy symptoms of her lupus in 2014 – including hair loss, problems with her hearing and sight, and arthritis.

She was even rendered unable to speak because of the long-term disease, and struggled with her movement.

Things got even worse when she had a seizure in front of her children, with doctors confirming that her lupus was affecting her brain.

Apparently she doesn't remember the next three days of her life that followed the horrific day of the seizure.

The poor mum has to keep clear of her kids when they become ill because of her affected immune system – and when her daughter Kayori had a cold, Kéllé caught it and ended up in intensive care suffering from pneumonia.

One day, she woke up and couldn't open her index finger before her whole hand became affected.

The star struggled to speak as she began to develop ulcers in her mouth – and she ended up having speech therapy to help aide the condition.

Kéllé bravely opened up about her battle with lupus on Loose Women in May this year, fighting back tears as she discussed her crippling health journey.

After a video was shown of Bryan getting speech therapy, she became emotional and said: "I don't tend to watch it because it's really painful to watch.

"It has been really difficult journey, but it's not just me going through it, that's why I'm here today because there's so many people struggling with lupus."

The mum has had to relearn how to read and write since the seizure, and she still struggles with short term memory loss.

But the good news is that Bryan has been having regular infusions to treat her disease and test results show that her health has been improving.

Before her Hollyoaks fame, Bryan had already begun building a promising acting career in the 1990s.

She had previously appeared on ITV cop drama The Bill, and she bagged herself a role in BBC's hit soap EastEnders, as a college friend of Lloyd Tavernier (Garey Bridges).

In 2012, she played the part of Fran in the BBC comedy Me and Mrs Jones alongside stars like Neil Morrissey and Sarah Alexander.

She then joined the cast of Hollyoaks as Martine Deverux in 2018 – where she gained high praise for her role in an episode that explored unconscious racial bias.

The episode – which aired back in April this year – followed a full day from the perspective of her character – and the racist micro aggressions she had to face as a black lady.

Speaking about the storyline on Loose Women, she said: "It was a tough one to film. I really did have to park every other area of my life to focus on this particular episode.

"The focus was looking at our lives in a little bit more detail. You know, sometimes we give overarching statements about, 'I’m not racist', or 'I’m not prejudiced' or whatever.

"But when we actually analyse and strip back… there are still those micro aggressions and micro racist behaviours and racist kind of analogies in our everyday life that we don’t recognise."

In 2019, Kelle was announced as a fresh new panelist for ITV's Loose Women – and during her time on the chat show she's opened up about her battle with lupus as well as her struggles with body image.

On one episode of the show, she recalled times where she was referred to as 'the fat one' in the girl group, by people including stylists, record company professions and hair and make-up artists.

She added that teenagers can be very "impressionable".

"That really did stick with me and made a big difference of how I saw myself. It took a long time before I recovered," she added.

She went on to say that she has suffered eating disorders over the years, and that: "I really do think about my weight and how I look."

Despite her horror seizure and health battles, Kelle has managed to raise two healthy children – her son Regan, nine, and her daughter Kayori, seven – whom she shares with her husband Jay Gudgeon.

Kelle and Jay tied the knot in 2010 – and the Hollyoaks star revealed the hilarious story of when their honeymoon was gatecrashed by a hippo.

She recalled the moment on Loose Women, where she explained: "I was on my honeymoon and we had these kind of open huts with no windows and no doors and the bedroom suite went straight out on to the river.

"It was late at night and I'm quite a jumpy girl anyway. So I got up, went to the toilet and then I looked out and there was a hippo!"

"He was stomping his way through, coming towards the bathroom and there were no windows, no doors and it's pitch black and I can see him in the trees and he was coming through and I was literally frozen."

Kelle went on to say that when she rushed back into the bedroom to wake up her husband Jay, he understandably didn't believe her.

He soon realised it was true, though,

"Then he got up and was like, 'Oh yeah that is a hippo,' and we just tried to play it really cool and we stayed really calm and he literally just stomped in and stomped out.

"I was absolutely petrified but it was an experience."