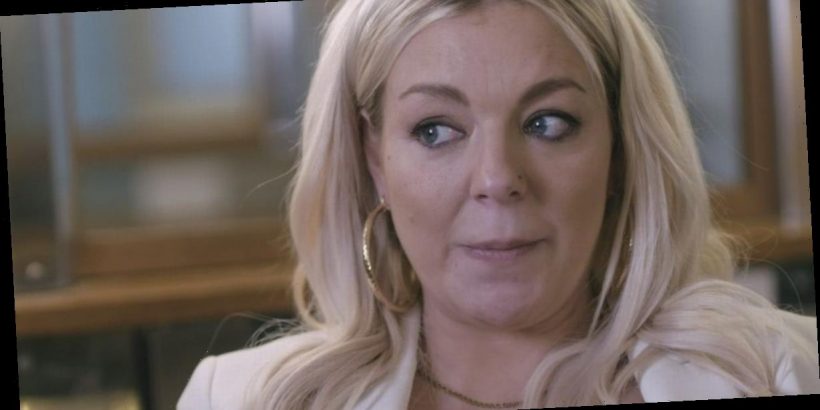 She is one of the country's biggest entertainment stars, said to be worth in excess of £17million, and is loved by just about everybody.

But Sheridan Smith 's life has often been as tumultuous and tragic as some of the most challenging scripts she has ever been handed.

The beauty has appeared in some of the biggest television shows, from Gavin and Stacey to Two Pints of Lager and a Packet of Crisps, as well as portraying legendary Cilla Black in a mini-series.

On top of that, she's found huge success on the stage, landing roles in productions including Legally Blonde: The Musical and Funny Girl.

Sadly for Sheridan, her glittering career hasn't always gone hand in hand with an easy life. Sheridan found herself in a downward spiral after her dad was diagnosed with cancer in 2015, before tragically losing his fight a year later.

It rocked the 39-year-old actress as she struggled to come to terms with the loss of beloved Colin.

Heartbreakingly, it was not the first time the disease had devastated her family.

She lost her brother Julian to cancer when she was just eight, something that set the young girl back considerably.

Battling a series of mental health problems in the aftermath of the harrowing period, she had what she called a "meltdown" after he was diagnosed.

Sheridan was riding high on the success of her portrayal of Cilla Black when things took a dark turn.

Battling anxiety and depression when she received news of Colin's diagnosis, it triggered a mental breakdown – something she has always been open about.

She made the decision to quit alcohol after she "fell apart completely" following her off-stage problems.

"I couldn’t cope," she said looking back in an interview with Stella magazine last year.

"I’d been to see specialists about stress and anxiety. I didn’t know what was happening to me.

"One doctor said I was bipolar, another said I was suffering from extreme anxiety disorder."

But soon, she was to be hurt by someone she had an incredible amount of respect for.

Sheridan revealed her humiliation by Graham Norton at the 2016 BAFTA Awards, and how it caused her "unbelievable distress".

Accused of being drunk on stage weeks before – something she always forcefully denied – he poked fun at her in front of the world when she was incredibly low.

He quipped: "We’re all excited for a couple of drinks tonight… Or, as it’s known in theatrical circles, a few glasses of technical difficulties."

He had no idea of the impact of his words that night at the glitzy bash as she failed to see the funny side of the cruel gag.

"That tipped me over the edge, I just lost it," Sheridan recalled.

"I was in unbelievable distress, trying to keep it all together and then a room full of people in my industry were just laughing at me."

Later, she confessed: "I seizured five times and got rushed to A&E and she's the one who got me breathing again."

Her career grew and grew as she started her recovery but her love life has also rarely been straight forward.

"What can I say? I don't pick them very well!" the actress told Vogue before meeting fiancé Jamie Horn.

Before that, she dated fellow star James Corden between 2007 and 2009 before short lived romances with Ross McCall and Reg Traviss, Amy Winehouse's former boyfriend.

Now a very big day is ahead as she plans her dream wedding.

Sheridan and Jamie got engaged back in 2018 after meeting on dating app Tinder.

But in 2019 she worried fans again after accusing her soon-to-be mother-in-law of murdering her dog.

Sheridan's tweets, which have since been deleted, sparked concern after pointing the finger at Jamie's mum Sandra.

"This woman is capable of anything," she wrote, before labelling her a "nut job".

"Also her son hates me like she does and they threaten me everyday.

"There it's out there. God knows how this will end but I love y'all."

She soon said sorry – and said she was "hurt and angry" after discovering her Pomeranian Panny was killed by another dog.

Sheridan said: "Thought I would clear up my silly rant. Firstly I apologise to anyone I upset, I was hurt and angry but this is no one's fault.

"It was an accident. Unfortunately my darling Panny was being looked after when another dog attacked her and as a result she died.

"I'm sorry for my outburst."

Despite her many hardships, Sheridan's life is very much heading in the right direction.

Sheridan gave birth on May 9, 2020 as Billy was welcomed into the world.

She took part in the groundbreaking Isolation Stories last year, which saw actors self-shooting the mini-series from their homes.

And the actress even had a documentary devoted to her, which looked at some of her most difficult moments.

Her career is growing and growing – and with a wedding on the horizon, fans hope she is about to finally find happiness.