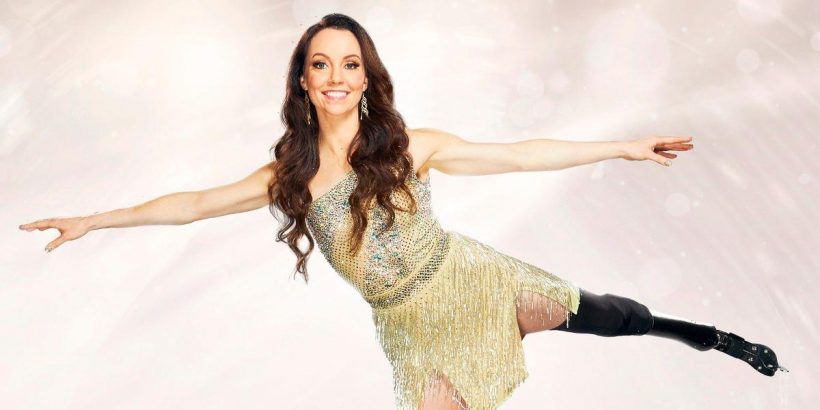 Paralympian Stef Reid is set to make her Dancing on Ice debut on Sunday, as the second half of the 2022 line-up perform their first routine.

The 37-year-old joins the likes of Love Island favourite Liberty Poole and The Vamps star Connor Ball, who will all be performing for the first time on the show after last week's launch.

Stef, who previously competed on Celebrity MasterChef in 2018 and was a semi-finalist, is paired with pro skater Andy Buchanan and will perform with a special skating prosthetic leg, after losing her right foot as a teen.

The pro athlete mainly competes in T44 long jump and sprint events, and has won a number of medals in her sports, including a silver in Long Jump F44 at the 2012 London games, and the 2016 Rio games.

How did Stef Reid lose her leg?

Stef, born to British parents in New Zealand, lost her right foot when she was 15 in a boating accident.

The star, who moved to Toronto, Canada when she was four, had been enjoying a weekend with friends when the freak accident happened.

The group had been having fun skimming across a lake while holding onto an inflatable ring which was being pulled by a boat.

But tragedy struck when Stef took a turn, as she waited for the boat to come and collect her after falling off.

She explained in 2016 how she noticed the boat wasn't slowing down as it came towards her, after a miscommunication between the driver and the spotter.

"I needed to think fast," she told The Mirror. "I was a great swimmer and had been training as a lifeguard, but I knew I couldn't out-swim a boat."

Stef said she decided to dive underneath the water as far as she could so the boat could pass over her – but her lifejacket made it difficult.

"I was underwater for what felt like a long time and when I finally reached the surface, gasping for breath, I couldn't feel any pain," she said.

"My first thought was, 'That was lucky. I’m not going to tell my mum that happened!' Then I noticed the water around me was red. Everyone on the boat was freaking out and I knew something was wrong."

The propeller had slashed Stef's right leg, glutes and lower back, with the athlete saying it "almost cut [her] in half" and she "thought [she] was going to die".

Stef was taken to a local clinic which wasn't equipped to cope with such serious injuries, as every air ambulance in the area was busy as it was a Bank Holiday.

The surgeon managed to save Stef's life, but had to concentrate on the injuries on her back as there are a number of important organs in the area.

That meant they had to amputate her foot – but she hasn't let her disability hold her back, as her athletic track record and place on the Dancing on Ice line-up proves.

Dancing on Ice airs Sunday night at 6.30pm on ITV