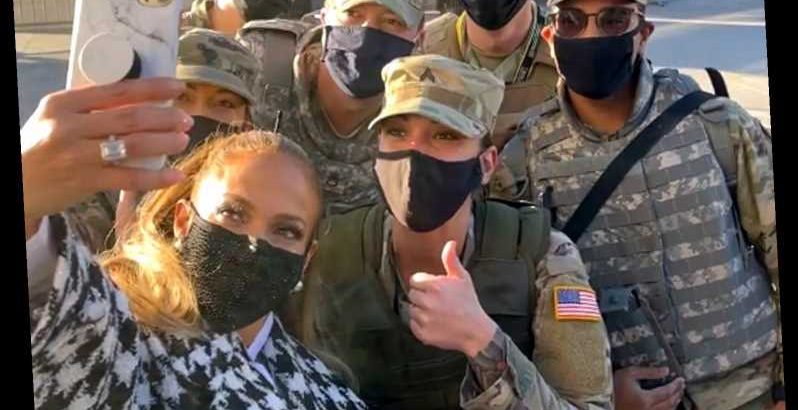 Jennifer Lopez took a moment to honor those protecting the nation as she prepared for her upcoming Inauguration Day performance.

On Tuesday, the "On the Floor" artist stopped to talk and snap a picture with members of the National Guard as she left the U.S. Capitol, following a rehearsal for her performance at Wednesday's inauguration of President-elect Joe Biden.

Lopez, 51, posted a sweet video to Instagram of herself taking the selfie with the troops, in which she can be heard asking, "Are we all in?" before snapping a few shots.

"What an honor to spend a few moments with these brave men and women," the singer began the heartfelt caption. "Thank you for your service and sacrifice. I honor you today and everyday. 🇺🇸 Tomorrow I sing for you and all Americans. ❤️🤍💙 #inauguration2021"

Lopez also paused to take a few photos on the steps of the House of Representatives with the Capitol dome visible behind her.

In the breathtaking shot, the singer is seen wearing a black-and-white houndstooth coat over a pair of matching high waisted pants and a white blouse. She also shared another photo to Instagram posing on the building steps alongside her team with the caption, "#InaugurationSquad 2021"

Wednesday's inauguration event will see Biden, 78, and Kamala Harris, 56, assume the positions of U.S. president and vice president, respectively, and will also feature performances from Lady Gaga and Garth Brooks. Gaga will sing the National Anthem at the swearing-in ceremony.

Like Lopez, Gaga also took some time on Tuesday to chat and meet with National Guard members following her rehearsal at the Capitol.

Chrissy Teigen and John Legend, who are also set to appear as part of Wednesday's inauguration festivities, also shared photos from their walk around D.C. Tuesday evening and snapped pics with some of the soldiers in the street.

"We got lost on the way to soundcheck but stumbled across these literal f—— heroes!!" the model captioned her series of shots.

Earlier this week, Rodriguez revealed that Lopez is "nervous" about performing at the inauguration as she feels a heightened sense of "responsibility" regarding the event.

The former athlete, 45, shared that while it's been a "crazy year" for Lopez in terms of her many performances, she feels especially accountable for her upcoming show in the District.

"It's been such a crazy year for her, so amazing, so many blessings. But to think in a span of 12 months, she's done the Super Bowl, New Year's [Eve] and now the inaugural, it's unbelievable," Rodriguez said on  The Tonight Show Starring Jimmy Fallon on Monday. "And what's interesting is she's most nervous about Washington, D.C. because of the responsibility."

Rodriguez, who popped the question to Lopez in the spring of 2019, said the singer wants to "bring people together" and "inspire" people with her inauguration performance.

"And you know, music and sports does that better than anything," the former Yankees player added.

Rodriguez also teased that the "On the Floor" singer has "something really cool" prepared for her performance.