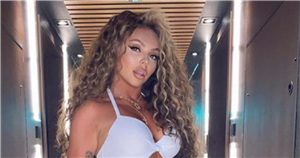 Jesy Nelson is set to release her first single as a solo artist since she left Little Mix nine months ago, according to reports.

The 30-year-old’s new track will drop in September along with an energetic music video which the singer has been rehearsing with her team of 20 dancers over the last few days.

It is believed her new music will be “more upbeat than some might be expecting” as the singer songwriter embarks on her journey as an established solo artist.

But her debut single is likely to divide fans after the Londoner left the girl group because of the negative impacts it had on her mental health.

A source told The Sun: “Jesy spent several months at the beginning of the year working on the music and it has all come together quite quickly.

“Her new record label Polydor are keen to strike while the iron is hot, so they are throwing everything at her project and want the first single out in a matter of weeks.

“Jesy has been working hard and is feeling really positive about this new chapter of her career.”

The Daily Star has reached out to Jesy’s representatives for a comment.

It comes after fans got to hear a snippet of the brunette beauty’s new track after she accidentally leaked the first few lines in a short video shared on Instagram back in June.

Jesy shared a clip of her working with her producer in the recording studio as they listened back to her upcoming single with excitement.

But after she uploaded the video to her public feed, the star was soon hounded with comments from fans as they listened to the track playing in the background.

Completely embarrassed, she quickly took down the original video from her main feed and added a mute version to her Instagram stories.

This will be her first video since the star left the girl group in December last year after she revealed in a telling interview with The Sun how she felt when filming music videos with the band.

Speaking to the publication in May, she admitted that she knew she wanted to leave after the group after they finished filming their music video for their chart topping single Sweet Melody.

She said: “The last music video we did was the breaking point.

“Whenever we had a music video, I put an enormous amount of pressure on myself to try and lose weight. I have a fear of looking back on the camera.

“If I don’t like what I see, I find it so hard to be in front of the camera and feel amazing and perform.”

The singer songwriter broke the news of her premature departure just two months after the group wrapped up Sweet Melody in an emotional statement following her short break from her work commitments.

The statement read: “To all my Mixers, the past nine years in Little Mix has been the most incredible time of my life …

“The truth is recently being in the band has really taken a toll on my mental health. I find the constant pressure of being in a girl group and living up to expectations very hard.

“There comes a time in life when we need to reinvest in taking care of ourselves rather than focusing on making other people happy, and I feel like now is the time to begin that process.”