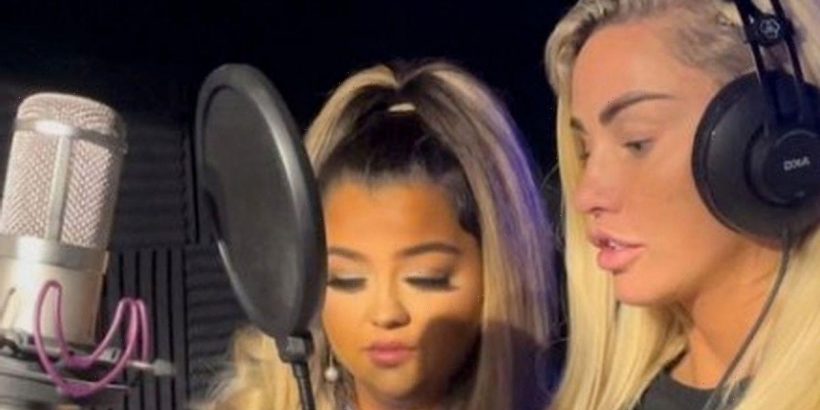 Katie Price is setting her sights on a chart-topping hit as she makes her return to music while saying "dreams do come true".

The former glamour model has been keeping herself busy an recently shared a snap of herself behind a mic in a recording studio.

But Katie, 44, left fans even further stunned when she revealed that she is working on new music alongside X Factor runner-up Scarlett Lee.

In 2018, Scarlett came second place in the ITV singing competition following behind eventual winner Dalton Harris and now it looks like Scarlett and Katie have teamed up to release something special to fans.

Sharing an image of herself and Scarlett in the studio, mother of five Katie also penned: "Dreams do come true. Never give up.

"Scarlett you are beautiful inside and out and an amazing singer and songwriter.

Earlier on, the OnlyFans star took to Instagram and said: "This is going to be beautiful. I’m loving it."

A happy Katie then added: "You’re making me so happy."

As fans already know, this isn't the first time Katie has taken the music industry by storm.

In 2004, she previously competed to represent the UK at the Eurovision Song Contest with her song, Not Just Anybody, but was sadly beaten to the position by singer Javine Hylton.

Later on she famously released a duet album with her ex-husband Peter Andre called A Whole New World, which accumulated huge success for the former couple.

After Katie and Peter were no more, the reality star continued to release music as a solo artist.

She also received requests from other musicians who wanted to work her.

Superfan Lia Metcalfe who is also the lead singer of Liverpool band The Mysterines said: "I'd love to do a song with her, just me and her, that would be really cool.

"I'd have to do a separate act, it wouldn't be through The Mysterines, me and her could come up with a really cool band name."