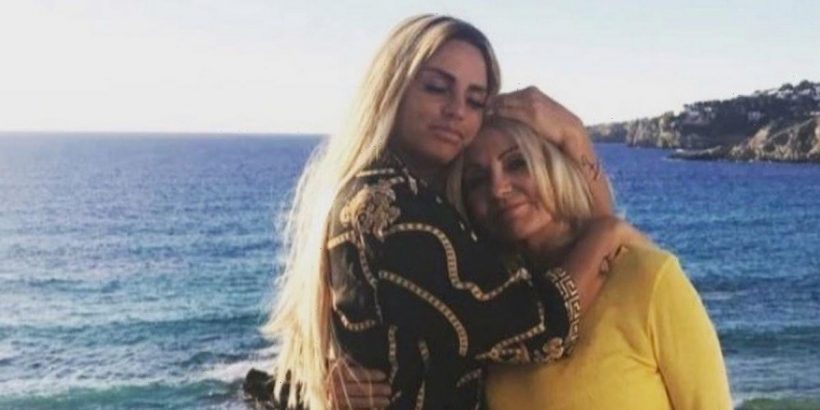 Katie Price has shared a wholesome snap next to her lookalike mum Amy, 70, and daughter Princess, 14.

The mum-of-five took to her Instagram story and uploaded a picture of her enjoying some family time as she cosied up to her mum and her eldest daughter.

The glamour model had a lovely day out with her loved ones as she later posted another snap of her mum – who's currently battling a terminal illness – and her younger sister Sophie, 32.

Katie's mum Amy has sadly been battling idiopathic pulmonary fibrosis since 2017, which is an incurable and terminal lung condition. Over the Queen's Platinum Jubilee weekend, the 44-year-old shared a selection of snaps of her mum with her kids, including Junior, 16, Jett, eight and Bunny, seven.

Junior looks delighted to be with his grandmother who rests her hand on a cut-out of Her Majesty, who is dressed in blue.

Katie captioned the pic: "Bank holiday blues with the family."

The mum-of-five has been open about her mum's health struggles and told the Lorraine show how hard it was to see her in pain. She told Lorraine, 62: "It's a horrible illness because you're suffocating… it's not nice to see your mum like that."

Earlier this year, Katie renovated her "Mucky Mansion" and got emotional as she explained her mum was designing a room in her new home for when she's gone.

"Because it could actually potentially be the last thing she ever does for me," Katie said.

"And hopefully she doesn't pass, but when she eventually does, I know I have a room that she put together. It's sentimental, a nice room, a happy room to be in." Amy also felt the room was important to the family.

She said: "When you're not well you look at things in a different way and it would be nice if you can leave things that people can remember you by."

Last year, Katie explained that her mum's illness was slowing her down but she is still a fighter.

She revealed: "She puts on a massive show of strength but her illness is slowing her down.