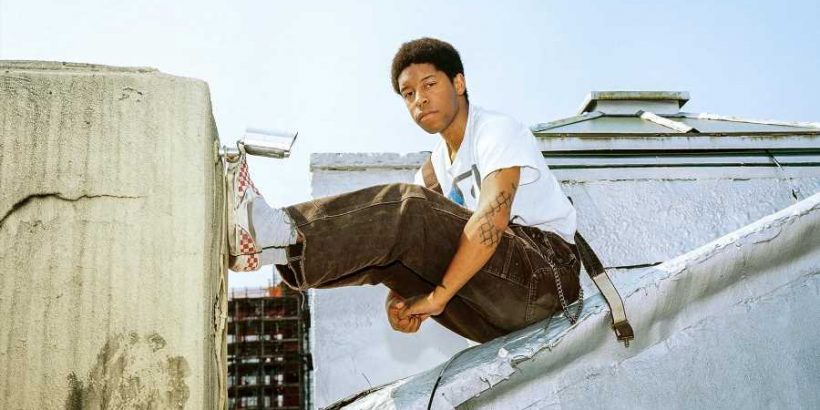 KennyHoopla is sitting on the steps behind the stage of Pier 17 in downtown Manhattan, his hands neatly folded in his lap, his head and shoulders hunching his body into a ball, his lips in a despondent frown. The 25-year-old pop-punk artist from Wisconsin — real name Kenny Beasley — is about to perform one of his first-ever concerts opening for Machine Gun Kelly, and he’s nervous as hell.

“Fuck, I don’t know what to do with myself,” he says, seemingly to himself, his tight group of friends backstage, and/or nobody. “I never know what to do.” His tour manager hands him the mic. “Let’s get it!” yells Malik Stevenson, Beasley’s DJ and childhood best friend, who performs as Asylum.

The Sharp and Swift Ascent of Ayra Starr

It’s nearing sunset, and the light blue sky melts to orange and pink as the teen crowd steadily files into the rooftop venue. Beasley takes the stage and rips into the moody “silence is also an answer//,” the opening track from SURVIVOR’S GUILT: THE MIXTAPE//, which he released last summer with Blink-182’s Travis Barker. “Observe from the bleachers, sidelines/This game is a tough one tonight,” he sings. He spins around the stage in white-and-orange-checkered Vans and black shorts and a T-shirt. “I wonder what you’re thinking right now/I wonder if you know you’re in my mind.”

This is the kind of emotional, honest, and direct songwriting that Beasley has mastered as KennyHoopla, a name he borrowed from a Spongebob Squarepants character. Alongside acts like Jxdn and Trippie Redd, Beasley is part of a pop-punk revival whose Gen Z fanbase might not have heard much of this genre before Juice WRLD blended emo and rap and Barker started producing artists on his label DTA Records.

SURVIVOR’S GUILT: THE MIXTAPE// contains all of the hallmarks of Nineties pop punk that made Blink 182, Greenday, and Rancid timeless. The songs are full of heartbreak and angst. There’s a tongue-in-cheek awareness when he delivers snot-filled lines about hating a city, or musings about whether a crush is thinking about him, too. Listening to SURVIVOR’S GUILT elicits the same emotions that watching “The Breakfast Club” might: it’s nostalgic, it’s formulaic, it’s punk. It feels sad — and whether you’re a teenager or wish you still were one — feeling sad feels good. 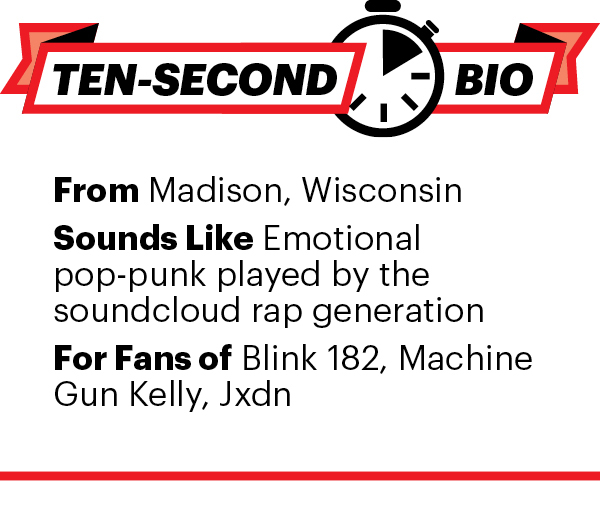 “You have to find the borderline between corny and cliché and, like, the wholesomeness in the middle,” Beasley explains. “Pop punk is a very humiliating genre. If you don’t do that shit right, it’s gonna be fucking horrible.”

Earlier that day in September, Beasley sits on the roof of an apartment building in Chinatown, wearing tan Carhart overalls and big, black Celine sunglasses, explaining his goals with the mixtape. “It’s not necessarily making hits, but it’s making anthems — anthemic things that people want to chant,” he says. “That’s something I’ve been in love with. I do want to be that great. I want to be able to make another ‘Mr. Brightside,’ another fucking ‘I Miss You.’”

With tracks like “Hollywood Sucks” — his most Blink-sounding song — and the noodling, melodic “Estella,” he’s getting there, with a little help from the pop punk godfather Barker. The two met on Instagram, trading comments, and then DMs, until Barker invited Beasley to record with him in L.A. There, in Barker’s studio, they laid down “Estella” in an hour, and the rest of SURVIVOR’S GUILT over two weeks on a second visit.

“He’s one of the best writers I know,” says Barker. “He is a true artist. He’s not just coming in and there’s writers helping him write or coming up with lyrics or ideas. He has a vision for everything.”

Previously, Beasley had only put out a handful of tracks, having snuck into a recording studio with his friend and producer Yoshi Flower on a previous L.A. trip. But Beasley didn’t play guitar, piano, or bass, and wasn’t surrounded with other musicians in Wisconsin to help put his ideas onto tape. “Estella” came from a blueprint that Beasley had been singing in his head for two years.

“I just would have hooks and make songs a cappella,” he says. “The hook for ‘Estella,’ I was like, ‘I’m gonna save that shit. One day it’s gonna be a song.’”

Barker describes their process as backwards, with Beasley singing the hook and then building the instrumentation around it. “Usually you come up with the chord progression, maybe an idea, and then write a chorus,” he says. “We wrote all the music around it. We would jam and come up with an idea, and Kenny would have a mic and he would sing. Kind of like old-school days, where you would write songs when you were in a band in a garage.”

“Estella” evolved from there, making its way onto YouTube, Spotify, and then a real-life performance onstage. “It’s fucking crazy to hear ‘Estella’ at a concert,” he says, “hearing people screaming it back the way I heard it.”

Beasley spent the first two years of his life in East Cleveland, and the rest of his childhood in Wisconsin’s Fox Valley, a cluster of small cities around the Fox River and Lake Winnebago in the middle of Madison, Milwaukee, and Green Bay.

“My mother moved me to Wisconsin when I was a kid, for a better future kind of thing, because Ohio wasn’t the best,” he says. His mother raised him, his older brother and sister, and cousin there. He’s never met his father, but he has spoken to him over the phone since, he says, his dad was released from prison a few years ago.

Away from Cleveland, Beasley’s mom tried to provide a better life for her family, working as a seamstress and a hotel housekeeper. “We moved to Oshkosh, Wisconsin, with 20 dollars, and then we stayed in a shelter,” says Beasley, whose family bounced around between their extended family’s homes before settling down in a low-income housing complex on the north side of town called Summerfield Place Apartments. “When I first moved there people considered it the hood,” he says. “I asked a girl out one time in middle school, and she said she couldn’t date me because of where I lived.”

Beasley didn’t feel like he fit in in Wisconsin. “Trauma is such a thrown-on word these days, but it’s the only word I can think of,” he explains. “Being around Black people and white people, anyone from all cultures, I’ll feel like I’m not fully there with them.”

He found rock and indie music by listening to the radio, and with a lot of encouragement from his mom, he dove in. “She got me my first pair of skinny jeans from Wal-Mart, when everyone was just being homophobic and shit around those times,” he says. “She let me express myself.” He remembers listening to “Changes” by 2Pac on a tape player every day as soon as he got home from school, and first hearing “Only Time” by Enya during nap time in kindergarten. “I was different than everyone else, being Black and being into rock music.”

Stevenson, 25, first met Beasley at an annual family festival in Oshkosh when they were in high school. “There were no shows growing up,” Beasley recalls. “It was just me and Malik listening to music. It was just a small town of people that didn’t get it.”

But that didn’t stop them from pursuing their interests, eventually moving to the nearby bigger city of Madison, where they started going to local shows, seeing emo bands like William Bonney and Midwest Pen Pals.

“When we work together, he is very on top of his game,” Stevenson says. “He’s always making sure his sound is a certain way, but he’s very experimental at the same time. It’s a good balance.” 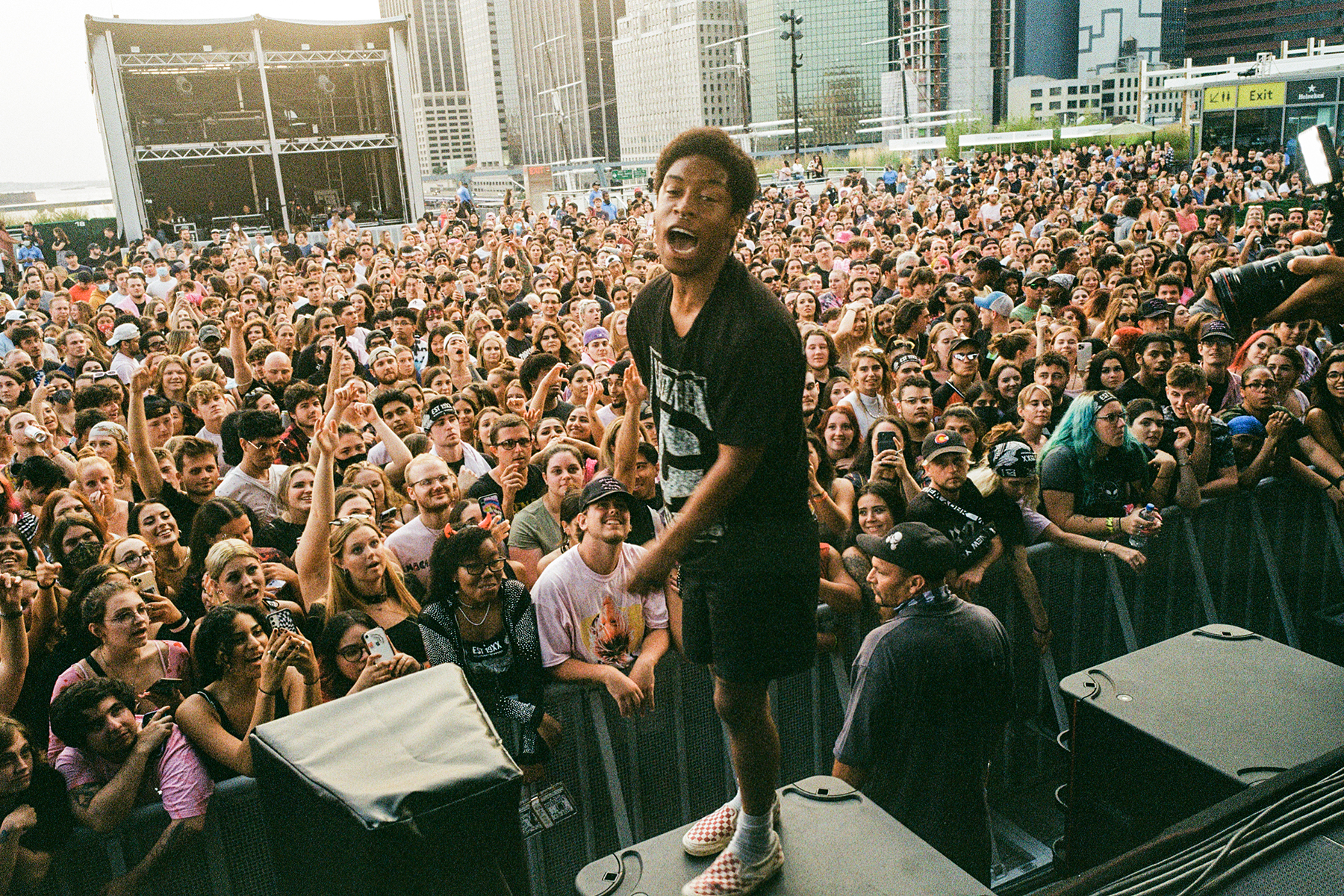 There’s a breaking down of genre in that sound, as hip-hop and punk continue to trade motifs and attitudes in the mosh pit of the internet. “I don’t think I’m even punk,” Beasley says. “I don’t say this to be like, ‘Oh, you can’t box me in.’ I just respect it so much that I wouldn’t want to be boxed into something that I don’t have enough knowledge about and can’t fully be respectful to.”

It’s anybody’s guess what direction Beasley will go after SURVIVOR’S GUILT — but Barker is confident in his protégé. “Whatever he wants he will be able to accomplish,” he says. “Whether it means making another album like the one we did or writing hit songs — singles that will be everywhere.”

Following the Pier 17 concert, KennyHoopla’s Instagram announces an aftershow at the tiny East Village basement club Berlin. “Keep a fucking secret,” the black-and-white flier reads, in magazine cut-out lettering. A couple hundred fans line up outside, far more than the venue can hold. As the room fills up, the audience screams along to Asylum spinning “Mr. Brightside” and chant “Kenny” over and over.

Beasley’s setlist is the same as the Pier 17 show, but by the time he hits the second song, “smoke break//,” his voice sounds more confident and stronger than ever. Even when his mic cuts out for an entire song, the crowd keeps moshing like nothing has happened.

“The truth is, my life is full of a lot of unfortunates, and me rising out of them,” he says. “That’s a big reason why I wanted to make music.”