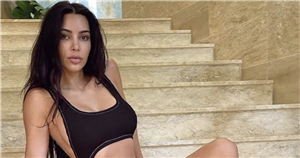 Kim Kardashian drove fans wild as she squeezed every single curve into a skimpy latex dress.

Sending temperatures soaring, the SKIM's founder posed in a seriously racy frock that caused her cleavage to pour from all angles.

The 40-year-old reality star couldn't decide which shoe she wanted to team with the brown faux leather garment, so instead, she asked her 221million followers for their advice.

She penned: "Which shoe?"

In the pic, the Keeping Up With The Kardashians star certainly showed off her killer figure as she modelled the dark brown-coloured garment from her own walk-in wardrobe.

Naturally, her famous hourglass proportions stole the show in the steamy item that boasted cut out detailing and was cinched-in nicely at her waist.

Kim, who is famous for her contouring coverage, opted for another makeup-free snap, showing off her radiant and fresh skin.

Her raven locks were swept back into a long and messy braid that fell down her back.

The mum-of-four faced a major shoe dilemma as she struggled to choose between a tan strappy pair of Manolo Blahniks or a statement wraparound Bottega Veneta shoe that seemed to match her attire.

On this occasion, her huge following didn't seem to be much help as they were totally divided on which shoes looked best.

One person penned: "The right goes with the outfit better."

Another added: "The brown, your right my left."

A third confused matters: "Your left, for sure!"

While one person joked: "For sure one of them."

Back in January, Page Six reported Kim Kardashian and Kanye West were getting a divorce after six years of marriage.

The documents also cited irreconcilable differences as the reasoning behind their divorce.