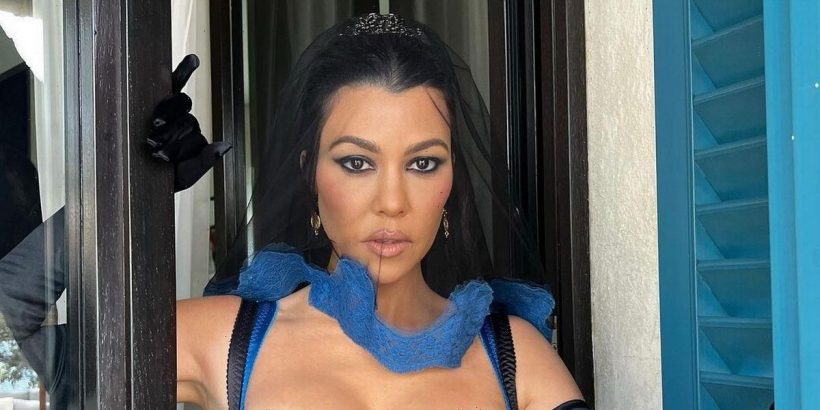 Kourtney Kardashian has been accused of "photoshopping" some of her newly-shared wedding snaps.

On Sunday (May 22), the reality star tied the knot with Blink 182 star Travis Barker during their third ceremony in Portofino, Italy.

The eldest Kardashian, 43, said no to a white wedding and embraced her rocker beau's punk side for their Italian-based wedding.

However, before doing so, Kourtney shared some snaps of her third wedding look on social media.

Kourtney could be seen wearing a short black dress and a black veil with a blue hem.

Kourtney's photos surfaced on Reddit with many fans commenting how unsure they were about her gothic look.

Some of her followers also accused her of "Photoshopping her body and jawline."

The original Reddit post said about "the power of editing" in the caption, accusing Kourtney of altering her photos.

Others jumped in and wrote: "That jawline is shopped, hun."

A second person added: "I have nothing against Kourtney and her body. But how much the hell do they edit their photos on IG??"

While a third penned: "I'm not saying that in the unedited photo Kourt is ugly but their photos are so much edited…"

The entire Kardashian family had headed over to Italy to enjoy the couple's big day with them.

The VIP event is taking place at a castle in Portofino on the Riviera coastline.

Last week, Kourtney, and Travis, 46, had a low-key courthouse ceremony in Santa Barbara.

The bride-to-be wore a stunning scarlet outfit that had sheer material across her legs and a distinctive fur-style sash across her chest.

SKIMS CEO and younger sister Kim, 41, arrived at the wearing a cut-out catsuit in dark grey, while her other sister Khloe Kardashian, 37, wore a leopard-print Dolce & Gabbana dress.

Kourtney arrived at the event holding the hands of her daughter Penelope Disick, who she shares with former partner Scott Disick and her niece North West.