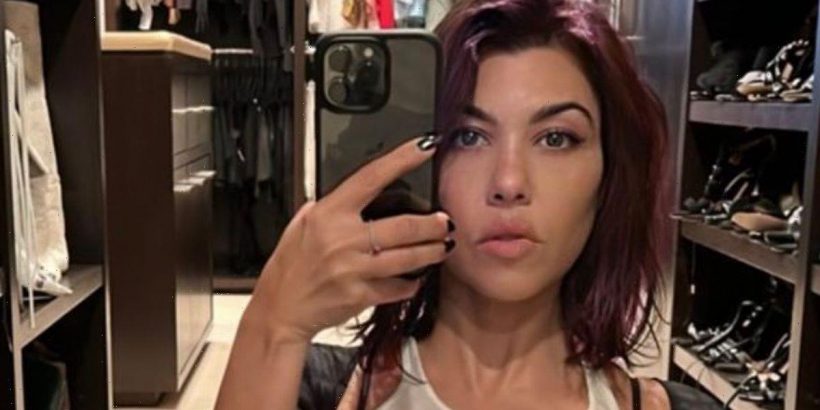 Keeping up with the Kardashians star Kourtney Kardashian has shocked fans with her new gothic hair style.

She made a return to her social media platform today after having a little break and surprise fans by sporting a new fringe and long ponytail.

The selfie-style video saw Kourtney showcasing her new fringe which accompanied a lengthy ponytail – with her wearing red lipstick, heart-shaped earrings and red contact lenses in a very gothic style.

She was heard in the clip saying: "No, like cray but also it'll be good."

Kourtney took to the comments to add: "You’re welcome for some new exclusive original audio."

Some fans thought that the brunette beauty looked like a 'vampire' and said she should be in the Twilight movies.

One person said: "Kourtney's in her vampire era"

Another responded: "Straight up looks like she's out of Twilight."

A third said: "What in the Twilight."

Another teased: "I don't remember this part of Twilight."

Whilst one person said: "It's giving Twilight."

Another asked: "Is this for a movie? If it is [I'd] take a guess it's for Twilight."

Others instead said that Kourtney didn't look like herself in the recent video, with one person writing: "You looked like a totally different person at first. Awesome look on you."

Another responded: "I didn't even recognise her at first."

Similarly, one person said: "I didn't know who this was at first."

Whilst one fan wrote: "Goddamm a whole new you."

"Why did it take me so long to realize that was her?," asked another in response to the video.

Whilst one fan said in their comment: "I didn't even notice this was Kourtney.

This comes after Kourtney released unseen photographs from her wedding day with her fans.

The mum-of-three took to Instagram to mark her grandma's 88th birthday by posting snaps from her legal ceremony with husband Travis Barker, 46, the drummer for rock band Blink-182.

Kourtney, 43, was joined by her grandma, MJ, as she had been one of the two witnesses at the couple's courthouse nuptials in California.

Travis' father had also joined the couple for the intimate Santa Barbara ceremony back in May.

In the first snap, Kourtney and MJ are seen clinking glasses of champagne as they enjoyed an intimate meal.

Kourtney is wearing a white strapless gown, featuring a bleeding-heart detail on the chest and a matching white veil and sheer gloves.