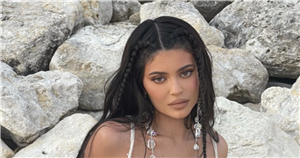 Millionaire Kylie Jenner, like all of the Kardashians, is not shy of a little publicity and being in the spotlight once and a while.

However, while there are fabulous privileges with being rich and famous there are certainly many trappings too.

Constantly being at the end of the public's criticisms and their relentless finger-pointing must be one of the hardest and Thursday night's episode of Keeping Up With The Kardashians was a case in point.

In the clip from 2011, Kylie is seen alongside her older sister Kim Kardashian who is frantically searching for an earring while on a family trip to Bora Bora.

Fans of the show were left in disbelief and shock over just how much she has changed over the years with many turning to social media to post their astonishment.

According to the Mail Online one fan wrote: "Kylie in the water is unrecognisable," while another said: "Kylie looks like a different person."

It has long been rumoured that 23-year-old Kylie has had some form of cosmetic surgery but she has vehemently denied going under the knife.

Kylie has admitted in the past to getting lip injections to give her pout some extra oomph but she has denied having surgery.

Despite the rumours, the star has changed drastically over the years since the first episode of Keeping Up With The Kardashians.

Want all the latest shocking news and views from all over the world straight into your inbox?

We've got the best royal scoops, crime dramas and breaking stories – all delivered in that Daily Star style you love.

Our great newsletters will give you all you need to know, from hard news to that bit of glamour you need every day. They'll drop straight into your inbox and you can unsubscribe whenever you like.

In 2016 she hit back at nosey parkers who maintained she had jaw surgery to reshape her face.

At the time Kylie said on her website thekyliejenner.com: "No I didn't [have cheek surgery]. People started saying that when I was 16.

"You really think Kris Jenner would let a 16-year-old me have cheek and jaw reconstructive surgery? No.

"I always used to love my jaw. I was never self-conscious about my jaw, but before I got my lips done, my lips were very tiny and more like sunken into my chin."

In 2016 she was also accused of having breast implants but justified her larger cleavage due to just "getting older".

"I've gained 15 pounds and my body has changed; I've definitely filled out," she said.