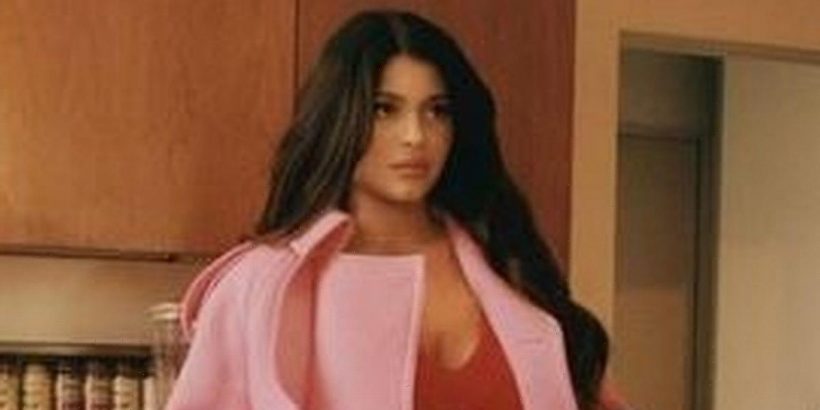 Kylie Jenner has sparked anger amongst her fans after posting a photo with daughter Stormi kissing her pregnant belly.

The cosmetic business mogul triggered anger with her Instagram fans when she uploaded the image of herself posing in an understated kitchen.

Dressed in a long pink overcoat and plunging red bralette, Kylie, 24, teamed the loom with matching red leggings and a pair of fluffy green sliders.

Wearing her long dark hair down in loose waves and her trademark nude makeup look Kylie gazed into the distance as she placed one hand tenderly on her four-year-old daughter's shoulder.

Wearing an adorable floral print shift dress Stormi stood barefoot in front of her mother as she leaned forward to kiss her baby bump.

The pair were seen standing in a small low-key kitchen for the photo, standing out against the bleak background of the plainly decorated retro design.

However, fans weren't impressed by the picture after they accused the $700million reality star of imitating life as a "poor" person.

One wrote: "I love it when you guys play working class."

Another added: "I love when rich people do poor cosplay."

Another social media user questioned: "Why are you pretending to be poor for an aesthetic?"

A fifth continued: "Not yall romanticizing the working class again."

Kylie – who gave birth to her baby son and second child with boyfriend Travis Scott on February 2 – captioned the post "a special throwback."

The criticism continued to pour in as fans poked fun at her for "pretending" to live in accommodation far below the standard she is used to.

One commented: "Whose house were you using as a prop here because I know those aren't your countertops."

Another quipped: "Her jacket and shoes probably cost more than house."

A third swiped: “Look Stormi this is where poor people live.”

Kylie has yet to reveal the name of her son who was originally called Wolf Webster before the couple changed their minds about his moniker.