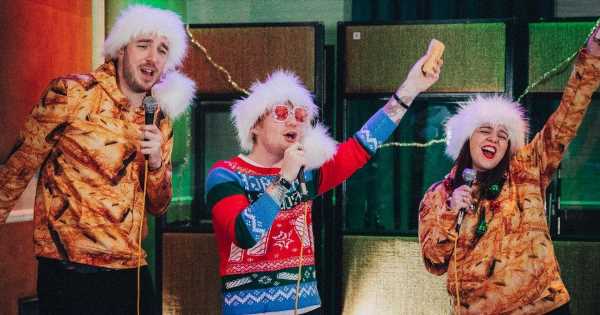 History could be made this Christmas as LadBaby is hoping for a fourth No1.

While The Beatles may have previously held the record for four No1s, LadBaby is hoping to make it four consecutive years of reigning over the charts.

The husband and wife duo have this year have teamed up with Sir Elton John and Ed Sheeran for Sausage Rolls for Everyone after the redhead messaged the duo on Instagram showing his support.

In true LadBaby spirit, they've had their own spin on Ed and Elton's Merry Christmas.

Mark and Roxanne said: "We always said we’d only go for a fourth number one if we could make it bigger and raise even more money for the Trussell Trust.

"We approached Ed and Elton with an idea to do something that had never been done: to combine the music world with the social media world and join forces to make a difference to the people in the UK that need it most.

"Ed and Elton are pop royalty and they’ve both had huge success at Christmas, so we’re honoured and excited to be coming together to help families this Christmas and bring back some true Christmas spirit with the power of sausage rolls."

They hope their history-making will ensure that nobody goes to bed hungry.

"Help us make history! We have to do whatever it takes to build a future where all of us can afford to go to sleep with a full stomach," the pair added.

"All profits will be donated to The Trussell Trust which is a very wonderful and important charity, so make sure you stream it, buy it and play it on repeat."

In 2020, LadBaby became the third act in the UK chart history to land three Christmas No1's back to back, following in the footsteps of The Beatles and Spice Girls

Sausage Rolls for Everyone is available to preorder now.