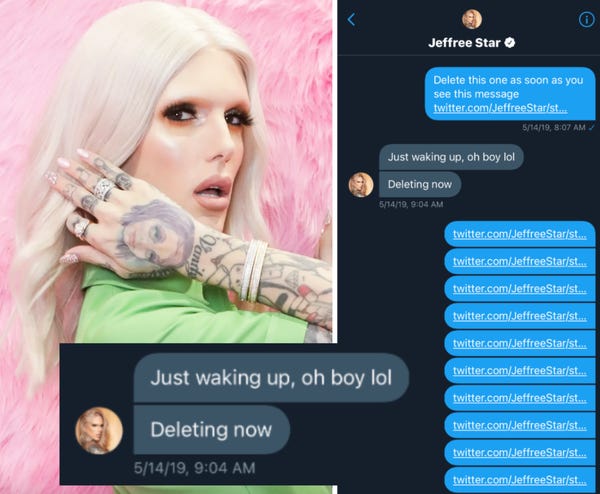 Makeup mogul and YouTuber Jeffree Star deleted more than 400 old, potentially offensive tweets in the days after he accused rival YouTuber and beauty guru James Charles of sexual misconduct, according to direct messages between Star and a former fan that were viewed by Insider.

Star, 34, is a controversial makeup influencer with more than 44 million followers across platforms. His company Jeffree Star Cosmetics has released some of the most sought-after makeup products over the past five years. Star, who Forbes estimates made $17 million in 2019, has repeatedly leveraged his personal dramas for social media fame. Most notably, in May 2019, he inserted himself into a public feud between Charles, now 21, and Charles' then-YouTube mentor, Tati Westbrook.

Insider learned of the coordinated effort to delete the tweets after a former fan of Star's shared a series of direct messages with Star that appear to show him helping Star identify which tweets to delete. In exchange for his assistance, Star promised in the leaked messages, but later rescinded, tickets to one of Star's Masterclass events. Insider was able to confirm the identity of the former fan, who asked to remain anonymous for fear of professional repercussions, through his verified accounts.

Insider confirmed the exchange began one day after Star had accused Charles of being a "predator" and a "danger to society." The fan came forward after sexual assault allegations against Star were documented in an October Insider investigation.

The direct messages shared with Insider show Star sending messages back and forth with the fan between May 13, 2019, and June 26, 2019, as the drama between him, Westbrook, and Charles waged on.

Westbrook first accused Charles of trying to sexually manipulate straight men in an explosive, since-deleted video on her YouTube channel in May 2019. Westbrook, now 38, is a long-time beauty YouTuber who often collaborated with Charles and had a close personal relationship with him. That changed at the 2019 Coachella music festival, when Charles did a sponsored post with SugarBear Hair — a rival hair vitamin gummy brand to Westbrook's own Halo Beauty. The move prompted Westbrook to post her allegations against Charles on YouTube, but she deleted the video after it led to massive backlash against Charles.

Star piled on, calling Charles a "predator" and a "danger to society" in public tweets that Star has since deleted. Star claimed as recently as April 2020 that he had a voice memo on his phone of "an alleged victim of James Charles," but he apologized to Charles in a July 2020 YouTube video.

Charles denied all allegations made by Westbrook and Star. Westbrook has since apologized to Charles and claimed that Star, along with YouTuber Shane Dawson, manipulated her into making her claims about Charles.

As Charles lost nearly 3 million YouTube subscribers in the wake of the allegations against him, Star attempted to do damage control of his own, the direct messages show. "My old humor doesn't translate these days," Star wrote to the fan, referencing his old tweets.

Some of the deleted tweets were about having sex with straight men, the former fan says

The former fan provided Insider with screenshots of 22 out of the roughly 430 tweets that messages show he sent to Star, most of which Star appears to have then deleted.

Over a dozen of the tweets are ones that included the word "rape," including "did your dad rape you, is that why you need attention," in response to someone being critical of him.

At least four of the tweets appear to be about Star having sex with "straight boys" and "straight men," including "I like straight MEN, not gay boys baby" and "Straight guy #2365 down hahahah *faints*."

Other since-deleted tweets include: "I've had so many straight boys naked that I think I deserve a life time achievement award," "I wonder who's DTF tonight? Straight boysss where u at," and "my revenge on you will not kill you…. it will make you wanna kill yourself."

In October, Star faced sexual assault allegations of his own, which were detailed in an Insider investigation. Star was accused of non-consensual groping during concerts and of using an electroshock tasing device to hurt others. He was also accused of performing non-consensual oral sex on a straight man in 2009 — the same year Star tweeted "I like straight MEN, not gay boys baby." Star was 23 at the time. Through his attorney, Star denied the allegations, calling them "false and defamatory."

Star 'promised' to give free tickets to the fan in exchange for his help, but blocked him after the fan finished finding tweets

The messages between Star and his former fan show the two coordinating plans for the fan and his niece to meet Star at his Manchester "Masterclass."

On June 16, 2019, Star asked the fan to email his "full name and number" to Star's assistant. The fan told Insider he emailed Star's assistant and asked if they could also receive the "VIP Goody Bag," marketed at a $450 value.

Star then DMed the fan a final time, rescinding the offer and blocking him on Twitter.

"Hey, a little shocked at your entitlement when emailing my assistant, the energy feels really ugly and after all the horrible stuff I've been through over the last few weeks I just don't want that negative energy in my class so God bless you and hope that we can meet another time when you don't expect so much from someone," Star wrote.

"You deleted a few hundred tweets for me and you're acting like I'm supposed to give you thousands of dollars of free make up, and all I promised was a ticket and to come say hi… Really sad."

Star and his assistant didn't respond to Insider's request for comment.

Pete Davidson's Birthday Party Was a Nightmare for His Co-Star