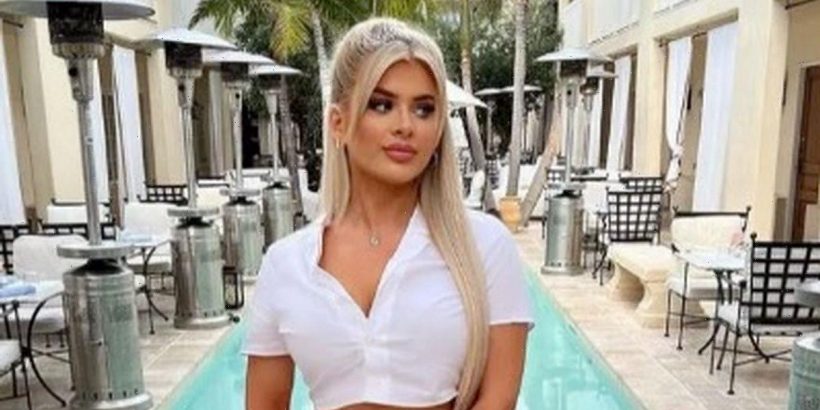 Liberty Poole has given fans a glimpse of her incredible figure in a cleavage-baring plunge bodysuit.

Posting to Instagram on Monday, the former Love Island star, 22, shared two stunning photographs of herself enjoying the Bank Holiday.

Dressed in a long-sleeved red In The Style bodysuit which she paired with blue denim jeans and a long acrylic manicure, Liberty looked sensational as she posed for the images in a modern bar.

Wearing her long blonde hair extensions in loose waves over her shoulders, the ex-Dancing on Ice contestant finished her look with gold hoop earrings and a sun-kissed makeup palette.

Quick to praise Liberty on the glam snaps were admirers from within her 1.5million Instagram followers, with one fan even referring to the reality star "Marilyn Monroe's better looking sister".

Another follower commented: "You look absolutely stunning as always."

The compliments follow Liberty and her Love Island co-star Kaz Kamwi being 'held at knifepoint' during their recent Los Angeles vacation.

The pals were enjoying a trip to LA when they were accosted by a 40-year-old woman carrying a knife last week.

After being assisted by two men nearby and the police, they fortunately escaped the altercation without harm.

Updating fans on Instagram following the incident, Liberty said: "Obviously it was a scary incident that happened Thursday but we didn't want it to affect the rest of our holiday so we've just been continuing on as normal and living our best lives.

"Obviously it's horrible that that happened but we're all OK and that is the main thing, that we're safe."

She embarked on a relationship with fellow islander Jake Cornish while in the villa – however, the fan-favourite couple hit trouble and broke up before the end of the series.

Despite not finding love on the show, Liberty may have found what she was looking for now as last month, it was revealed she had been enjoying a string of dates with a carpenter named Tyler.