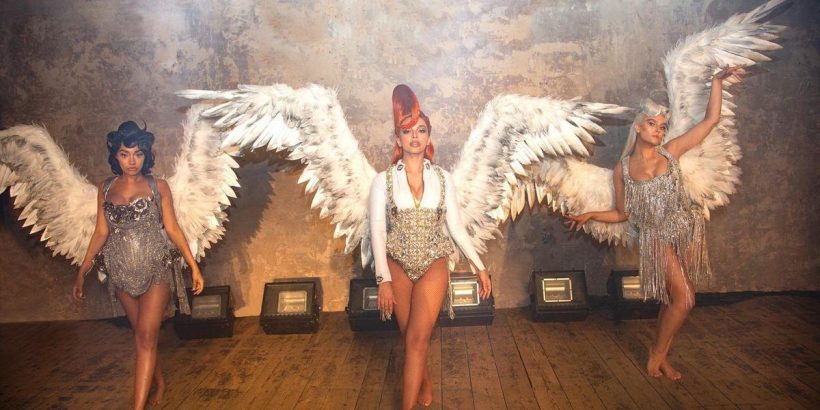 Little Mix stars Perrie Edwards and Leigh-Anne Pinnock have treated fans to a new sneak peak at their growing baby bumps after sharing an angelic snap of the group dressed in angel outfits.

The heavenly photo shows the girlband sporting a set of feathered white angel wings during a photoshoot to promote their new single, Heartbreak Anthem, which has been produced with DJ David Guetta and Swedish hit-makers Galantis.

The angelic photo was posted on the band's social media accounts such as their Instagram profile – which has a whopping 14.1million followers.

The band were counting down to the new single as they captioned their Instagram snap: "One day until #HeartbreakAnthem @wearegalantis @davidguetta."

And their adoring fans on social media flocked to fill the Instagram comments section with compliments on their angel outfits.

One excited fan penned in block capitals: "This picture is so stunning wow."

Another was quick to reference their hit song Wings, writing: "Cause wings are made to fly."

And a third joined in, writing: "Literal angels."

Singer Perrie, 27, is expecting her first child with Liverpool footballer Alex Oxlade-Chamberlain, and broke the news just a few days after her bandmate Leigh-Anne announced her own pregnancy.

Leigh-Anne, 29, broke her own first-baby news at the beginning of May, when she revealed she was pregnant alongside footballer fiancé Andre Gray almost a year to the day after the pair got engaged.

The singer, who has been dating the Watford striker since 2017, made history with her fellow Little Mix stars Perrie and Jade Thirlwall, 28, when they became the first girl band to win Best British Group at the BRITs 2021.

Leigh-Anne and Perrie melted hearts when they showed fans their baby bumps for the first time on the night of the award show, as they dressed in angelic gowns for the ITV event.

And despite being mums-to-be, the stars have no plans to delay their highly-anticipated Confetti Tour in 2022, and the band have revealed they'll be bringing their babies on the road.

In fact, they even joked they'll need to bring a crèche on tour with them so they can continue performing.

At the BRITs ceremony, the band joked with host Jack Whitehall when he asked them: "Are you going to need a babysitter with you?”