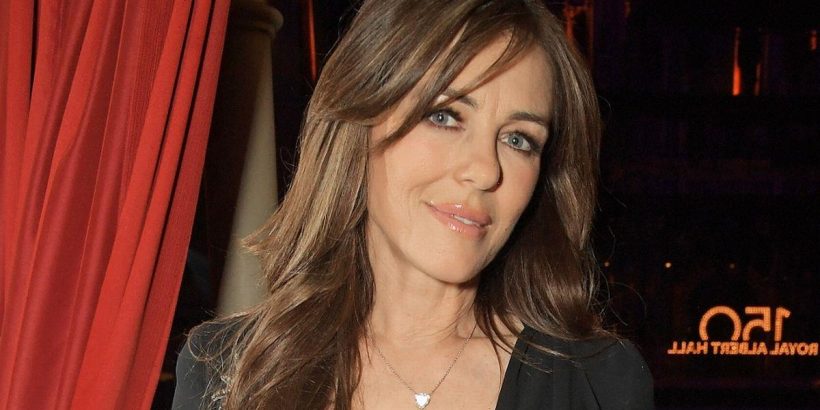 Liz Hurley made sure all eyes were on her on Thursday evening as she enjoyed a rare night on the town.

The actress, 55, looked sensational as she attended at the British Ballet's Charity Gala at the Royal Albert Hall in central London.

Featuring a plunging neckline, the racy garment scooped all the way down to Liz's navel putting her ample chest on full display.

In fact, it was impossible to miss the model's popping cleavage as she posed for a series of snaps in a private box at the venue.

With her long brunette locks falling freely over her shoulders, Liz perfectly toed the line between sexy sophistication and leaving too little to the imagination.

She completed her look be accentuating her trim frame with a black and silver belt.

Liz was joined by Britain's Got Talent star David Walliams.

Amanda Holden's co-star looked dapper as ever in a black and white tux as she posed with his close friend Liz. Darcey recently opened up about her time on the hit BBC show, admitting that she would go back as a guest judge but not in a full time role.

She said on the Jonathan Ross Show: "It was a big thing for a ballet dancer to get.

"I had seven years and I do miss it.

"They are great people. I miss that it is like being part of a company again."

The BBC regular and MBE holder added: "I wouldn't go back permanently but it would be lovely to be a guest judge or something."

Meanwhile, Liz recently told The Daily Mirror how she keeps trip by cleaning her home.

She said: As you get older, it’s harder to keep the weight off if you’re not active.

"Even cleaning the skirting boards can burn a lot of calories, there’s a lot of things we can do which isn’t just yawn, yawn go to the gym.

"I’m very active outside all the time, plus I spend my life running upstairs carrying things and faffing, so I think I burn a lot of calories by being active."