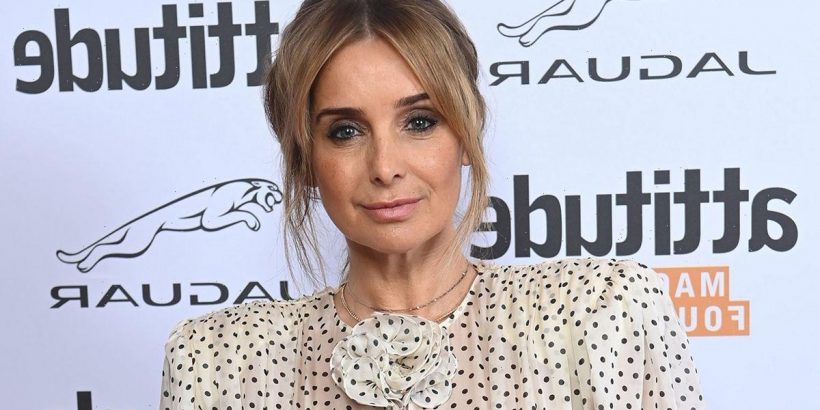 Louise Redknapp is said to be putting on ‘a brave face’ after being left devastated and blindsided by ex-husband Jamie’s surprise marriage to model Frida Andersson last week.

But last week, Jamie tied-the-knot with Swedish model Frida, 38, with whom he is expecting a third son in the coming weeks.

The newlyweds celebrated in front of friends and family in Chelsea last week – with a reception at Scott’s restaurant in Mayfair afterwards.

Heat magazine reports that the happy scenes were a punch in the stomach for Louise.

A source told the publication: “Louise is devastated, but she’s trying to put on a brave face for the sake of the kids and everyone around her.

“She’s said that, even though Jamie told her it was on the cards, she was blindsided by it happening so soon. She doesn’t understand what the rush was or what they are trying to prove by having a surprise wedding.”

The star is now considering giving up her married last name now that Jamie has a new wife and after noticing that Frida has already changed her name on social media from "Andersson" to "Redknapp".

The source claimed: “Louise has said it’s like having to go through the grieving process for her marriage all over again.

“It took her years to get over it. It feels embarrassing having Jamie’s last name now someone else has it. But part of her doesn’t want to let it go right away.

“Now she is having to talk with her management about going back to Louise Nurding for her career.”

Sources go on to tell the publication that Louise thinks Jamie has been “cruel” by getting married to someone else so quickly and she feels “the door has been slammed shut on her.”

And that she wants to carry on with her work in theatre and music – but wouldn’t be comfortable doing so: “using Redknapp as a stage name.”

While another source, allegedly close to the singer, has claimed she is “a mess” and that she feels Jamie’s new chapter is “brutal and raw” for her.

Jamie and Louise’s marriage came to an end after 19 years in 2017 – just months after she had been a contestant on Strictly Come Dancing – and their divorce was finalised in 2018.

Some fans pointed the finger of blame at the alleged “Strictly Curse” and questioned if she had grown too close to her dance partner, Kevin Clifton, during her time on the show.

However, Louise threw Kevin away in her book, You’ve Got This: And Other Things I Wish I Had Known, which was released earlier this year.

She suggested Strictly contestants and their dance pro partner’s professional relationships are only temporary, writing: “It’s not real. Once the show finishes, you move on. You go, ‘OK, we weren’t that good friends!’”

In her book, she also opened up about the collapse of her marriage and warned fans not to make the same mistakes as she had.

Explaining that she spent too long in her marriage trying to make everyone else happy and not giving time to herself, she said: “I wish I’d tried.

“I want to say to anyone thinking of running: Just slow down. Don’t run. Because once you run too fast, you can’t make up the ground you’ve lost.