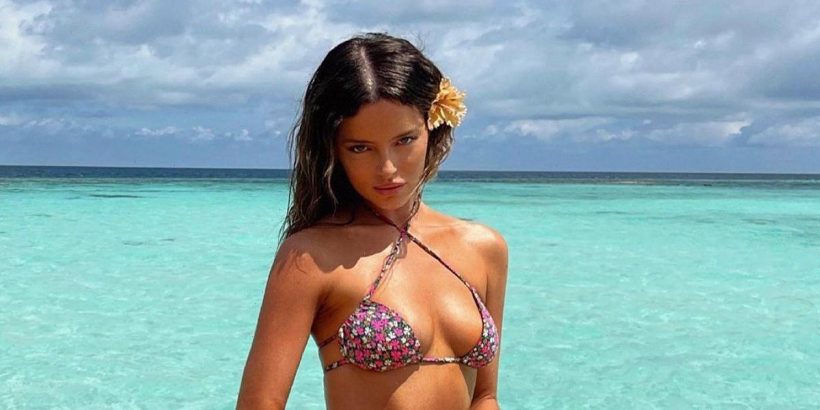 Love Island bombshell Maura Higgins is "dating" Milton Keynes Dons footballer Connor Wickham and the pair have jetted off on their first holiday together.

Reportedly the couple have been dating on the quiet for a few weeks and things are going well.

According the The Sun, the brunette beauty is "totally mad" on the footballer and the two have already been on holiday to Paris.

A source told The Sun: “Maura keeps her cards close to her chest but she seems totally mad on Connor.

“A good friend of hers put them in touch and they have been talking for some time.

“Connor and Maura went to Paris last month and it ended up being so romantic.

“They made it official then and have now gone off on their first holiday together as a couple.”

Connor, who will become a free agent at the end of this month after his MK Dons contract runs out, has a daughter from a previous relationship.

Maura teased fans with the possibility of a new romance whilst she was in Paris at the end of May.

In one of the pictures posted to her Instagram, the reality star can be seen enjoying a meal and a glass of red wine while sat opposite an unknown figure, who we can now guess was Connor.

The former Dancing on Ice contestant captioned the gallery of snaps "Fight for your fairytale," suggesting she has embarked on a new romance.

Comments on the star's picture continued to fuel speculation, with Maura's Love Island co-star and bestie Molly-Mae gushing: "No stop cos my heart."

Another one of Maura's friends wrote: "I can't look at these pics without smiling x p.s… cupids work here is done."

Since her time on the ITV dating show, the Irish native has had plenty of high-profile relationships.

While in the villa, Maura struck up a bond with dancer Curtis Pritchard and the two enjoyed an eight-month relationship before calling it quits in early 2020.

In November 2020, Maura and Chris Taylor broke the news to their millions of followers that their friendship had turned into something more.

A few months after confirming their romance, the pair parted ways after realising they were better as friends.

The Glow Up presenter's most recent relationship was with Strictly's Giovanni Pernice.

The pair confirmed their relationship with a series of romantic snaps posted in July, but called it quits shortly after.