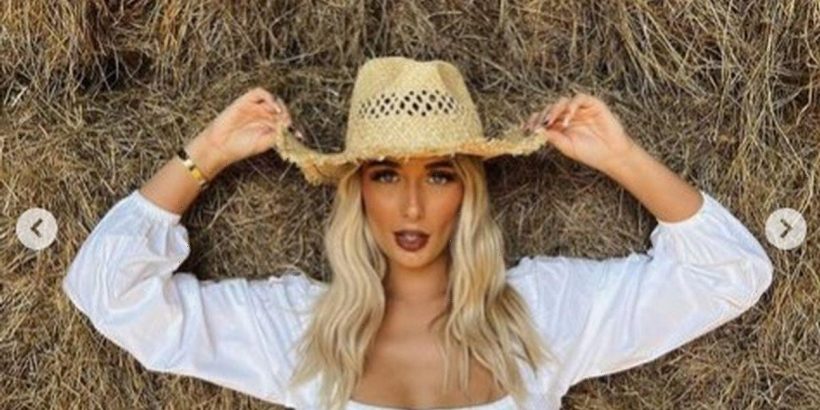 Love Island star Millie Court might have left her days in the Spanish villa behind her, but that doesn’t mean she’s stopped turning heads as she dazzled fans with an epic cowgirl inspired outfit.

The 24-year-old bombshell has been keeping herself busy since she won the popular ITV programme with her hunky Welsh boyfriend Liam Reardon last year.

In recent weeks, the starlet jetted off to California with her fellow Islanders Lucinda Strafford and Kaz Kamwi to attend the star-studded music festival Coachella.

And it’s fair to say the trio left little to the imagination as their loyal legion of fans were left gasping for air when they showcased her fashionable ensembles online.

But before the blonde beauty returns to reality, she couldn’t help but embrace the American culture as she shared a slew of snaps while she channelled her inner cowgirl.

On Tuesday (April 26), the model donned a white cotton flood-length maxi dress which featured classic milkmaid sleeves and included a cascade of buttons down the centre of her dress.

She accessorised her outfit with an oversized brown belt that enhanced her hourglass figure and completed the look with a pair of light tan cowboy boots and a straw hat that mimicked that of a Western cowboy hat.

Millie added a simple gold bracelet and an array of gold rings which complimented her golden tan that practically glowed against her white dress as she styled her blonde locks in relaxed tousled waves.

As she posed by a towering stack of hay, the reality star couldn’t help but hold onto her hat as she looked off into the distance with a sultry stare.

The fashionista rocked a full face of glamorous makeup which complimented her natural beauty as she accentuated her chiselled cheekbones with a soft brown contour and added a thin band of eyeliner to her eyes topped with lashings of black mascara.

She finished her beautiful look with a deep chocolate brown lipstick that showed off her killer pout as she posed up a storm for the camera.

Millie captioned the snap: “Can I get a yee haw? [cry laughing emoji and a cowboy emoji]” in full view of her 1.9million followers online.

And her famous friends and loyal legion of fans soon flooded to her comments to compliment her on her stand-out outfit on social media.

One user penned: “wowwww how are you even real [three heart eyes emojis],” as another agreed, saying: “Yeehaw partner [heart eyes emoji and a fire emoji].”

For more of the latest showbiz and TV news from the Daily Star, make sure you sign up to one of our newsletters here .