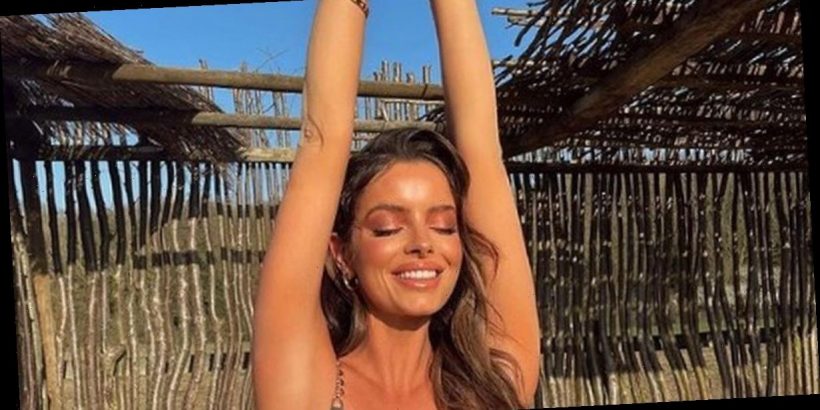 Maura Higgins, Chloe Ferry and others stripped down to their bikinis as they indulged in the scorching UK heatwave this week.

A whole host of reality stars have been getting down to some serious sunbathing as Britain experiences a long-awaited heatwave – the first of 2021.

Weather forecasters have suggested the beaming sunshine will only last a couple of days, and by next week some areas will even drop down to freezing temperatures with snow on the cards. Temperatures soared as pregnant mum-of-two Kimberley, 39, showed off her gorgeous fresh-faced skin in one image of her basking in the sunshine.

The blonde beauty closed her eyes and donned a sailor-style blue and white striped bikini with her glowing bump on show.

The star was bathing in a hot tub for the occasion as she said: "Celebrating my @regattaoutdoors launch with a little hot tub action in peace and quiet.

"Well it’s actually more of a lukewarm tub due to the little man. But it’s still absolutely blissful!!!!!"

Her ample cleavage nearly spilling out, Chloe embraced the summer completely with a truly scrumptious sundae covered in hundreds and thousands and strawberry sauce.

"I see you UK 22 degrees," the reality star captioned the snap, before sharing another snap of her in a blue and tangerine bikini.

Irish Dancing on Ice star Maura, 30, was also loving the heatwave as she posted a pic of her shimmering tanned body in the hazy sunlight.

Wearing a white bikini and her caramel locks styled into beautiful long waves, Maura held her arms up in the air as she captioned her post: "Golden hour it’s been a minute."

Megan Barton-Hanson also showed she was joining in on the action as she shared a snap of her wearing skintight black workout wear and clearly feeling the heat, as she stuck her tongue out for fans.

Slipping into their bikinis, Amber revealed she was "filming something fun in the sun" for the reality series.