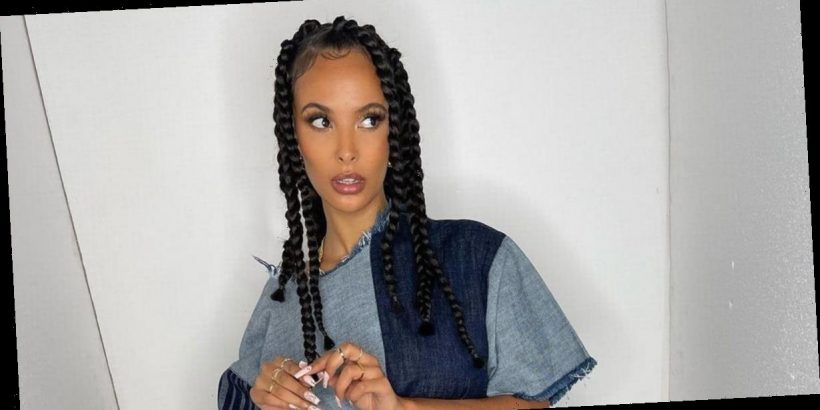 Presenter Maya Jama has wasted no time in getting to work after being announced as Stacey Dooley's replacement on BBC Three Show Glow Up: Britain’s Next Make Up Star.

Maya, 26, looked stunning as she posed in a skimpy denim minidress on the set of the hit show, praising the professional lighting behind the scenes.

The bombshell put on a seriously leggy display as the hemline of the tiny dress skimmed her toned thighs as she completed the look with matching denim boots.

Maya struck a series of poses as the loose dress, which was designed into a number of patchwork patterns, slid off her shoulder for one of the snaps, which saw her pose on top of a stool in a white room.

The trendy dress also featured a frayed hem and neckline, sending her fans wild as she wowed for the camera in the gorgeous backstage snaps.

Maya also showed off her simple but glamorous make-up under the lights of the white booth, and wore her hair in chunky twists, leaving her fans hot under the collar.

She captioned the snaps: "Perks of working on a make up show.. good lighting everywhere."

Unsurprisingly, it didn't take very long for the compliments to come pouring in for the TV star, as fans sent her congratulations on her new job, whilst many commented on her stylish outfit.

One posted: "Love this look."

Another added: "So so beautiful."

A third chipped in: "GAME OVER for everyone," while a fourth said: "Love this hair on you."

Glow Up is set to return for a third series later this year, and Maya will be stepping in for Strictly winner Stacey, who presented the first two series.

Maya said of her new hosting job: "I absolutely LOVE Glow Up and can’t wait to join the family! I’m obsessed with makeup and creating different looks – it’s going to be so much fun and I can’t wait to see what the [Make Up Artists] get up to!"

Stacey announced back in October that she would be leaving as host, saying: "I won't be able to be a part of Glow Up, series 3.

"It was such an utter delight to work alongside Dom and Val. Total stars.

"And of course, a real treat to meet the artists, and appreciate their creativity! It's a show v close to my heart, and I wish everyone involved in the next gig, all the love in the world."