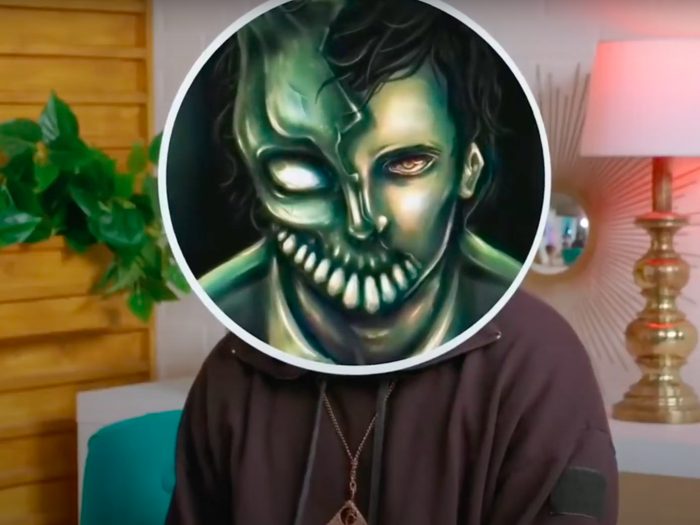 Corpse Husband's name has been everywhere in the past few weeks, but he won't be revealing his real identity anytime soon. The anonymous YouTuber and gaming streamer has blasted from relative obscurity into more mainstream internet stardom this year.

Corpse Husband is 23 and lives in California. He's built a cult following over five years, steadily adding to his subscriber by reading out scary stories that fans submit via email. He's elusive and mysterious, and his reclusive persona is beloved by his followers.

He's never shown his face or revealed his identity, but the mystery helped attract fans of online horror that frequent subreddits such as r/nosleep and r/LetsNotMeet where people post first-person narrative scary stories.

Recently, however, his steady growth got a major boost through his streams of the video game "Among Us," which he played with a group of world-renowned gamers. He currently has 4.63 million YouTube subscribers and counting.

Corpse has uploaded sporadically in the last five years, but his fans have stayed loyal throughout the months-long breaks he takes for his mental and physical health. He has recently started making music — his most famous (and NSFW) song, "E-GIRLS ARE RUINING MY LIFE," has over 11 million views on YouTube and gained particular traction on TikTok. Corpse's voice has also become something of a meme on the platform.

Some of Corpse's fans are borderline obsessive, and he has had to beg them to stop sending him large amounts of money his way. They went wild when Corpse was coaxed back to Instagram in October, and he rewarded them for hitting 100,000 followers with photos of his hands.

Corpse started livestreaming with some of YouTube's top gamers in September, quadrupling his subscriber count in under two months.

Some of the stars he plays with include PewDiePie, Jacksepticeye, Pokimane, Julien Solomita, and Valkyrae, to name a few. In particular, Corpse has participated in several viral streams of "Among Us," the murder-mystery mobile and computer game where crewmates on a spaceship have to identify the impostor on board before they kill everyone.

The game became an international sensation as people in coronavirus lockdowns all over the world discovered it as a fun way to keep in contact with their friends.

For Corpse, it opened up a whole new demographic of fans as he found himself on the radars of millions of more people. This catapulted him from unfamiliarity to being one of the most well-known names in the YouTube gaming world. Whenever Corpse entered the game, he'd be met with amazement at how uniquely low his voice really is.

"Oh my God," said PewDiePie on hearing Corpse's voice for the first time. "I didn't know you could hit puberty twice, Jesus."

"Gets me every time," said beauty guru James Charles in a video for his channel "Playing Among Us For The First Time!!"

In another game, one streamer asked Corpse if he ever got annoyed fielding questions about it.

"No, but I'll get the questions out of the way first," Corpse replied. "I've never smoked anything before, and I didn't just wake up."

He even ended up in a game with Rep. Alexandria Ocasio-Cortez

The appreciation of "Among Us" spread further than YouTube. In October, Rep. Alexandria Ocasio-Cortez put out a call on Twitter for streamers to play with her live, in a bid to encourage the public to vote in the 2020 election.

Dozens of influencers and streamers responded, including Corpse, which culminated in an epic three-hour stream with some of the internet's biggest stars.

"His voice is so deep," AOC gasped when Corpse joined a game. "I can't get over this dude's voice; it's so low."

Corpse, clearly starstruck, interacted with AOC later on in the game.

The stream was watched by 400,000 people at the time, and Corpse gained 440,000 subscribers that week, according to Social Blade statistics.

Coping with new-found fame has been a challenge

Corpse has been thankful and welcoming to his new fan base, but it's been a double-edged sword. He appeared as an interviewee in one of popular YouTuber Anthony Padilla's videos in March, called "I spent a day with FACELESS YOUTUBERS." He had about 1.2 million subs at the time and spoke about how never revealing his face helped with his career in horror narration, as "people get to use their imagination a lot."

He also talked with Padilla about how being an anonymous YouTuber has "pretty much f—ing eviscerated" his private life.

"There is not a single picture of me since before YouTube with my entire face in it," he said, adding that it's quite difficult to date anyone.

"I can't take pictures with them really," he said. "Not without being like, this could get leaked. Also, wearing a mask with people everywhere is kind of weird; they have to be OK with that."

In a tweet, Corpse hinted he was struggling slightly with the newfound attention, and how it only confirmed his desire to be faceless.

"I would love to have a conversation [with] @billieeilish or something about how [the f—] she coped with coming up so quick because this s— is hell behind the scenes lmao," he said. "So much wild s— goes on. I can't imagine my physical appearance being out there on top of that, sounds crazy."

Corpse said his day to day life hasn't changed significantly in a recent stream — he still gets up and goes to his computer.

"I don't go outside, as I'm sure a lot of you know now," he said. "No one recognizes me or anything."

He then hesitated because he wasn't sure whether to talk about something that had happened to him.

"I did get recognized for my voice in person the other day," he said. " At a f—ing drive-thru. I won't say any more than that, but it was scary."

Corpse has spoken several times about his mental health and how hiding his identity impacts it. When he was interviewed by Padilla, he said his anonymity has "definitely added" to his fear of the outside world.

"I have like very bad anxiety. I never leave my house," he said. "I feel like I had other issues prior, but if definitely made it more logical in my head despite probably being irrational."

We probably won't get a face reveal any time soon

Corpse told Padilla that he sometimes wakes up and thinks he might post a selfie as a face reveal, but judging by his recent boom in popularity, it's unlikely that will happen any time soon. He said nobody could measure up to what people have built up in their heads anyway.

Despite quite a lot of theories floating about on Reddit, he said nobody has ever guessed his real identity correctly. He said it's a very "Hannah Montana" thing because barely any of his friends in his real-life know that he is Corpse Husband.

"I don't have to worry about people in my personal life using me for clout, because they don't know I have clout," he said.

Corpse said he quit going to school at 12, and many people from his past think he "dropped off the face of the planet and died." He told Padilla he sometimes wishes those people knew something of his success.

"My teachers all said I would be nothing, and all my friends thought I was a drug dealer," he said. "I would like to tell them about it a bit."