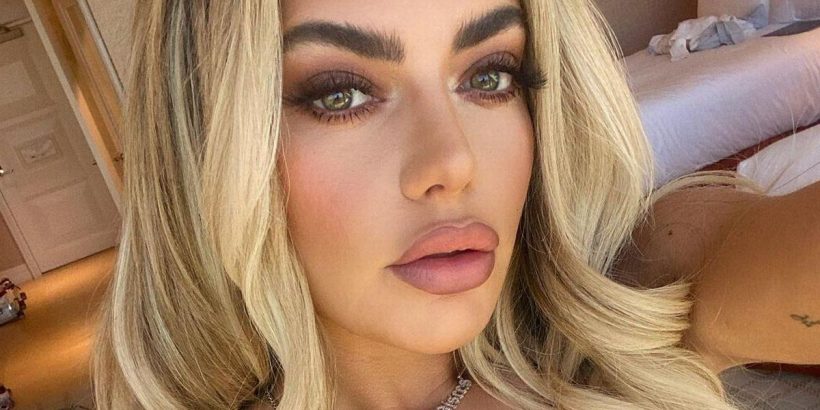 When the OnlyFans model filmed MTV show Celebrity Ex on the Beach, she struck up a romance with TOWIE hunk James Lock.

Her ex Emelle Smith then made a surprise appearance.

Megan was left torn because she has feelings for them both.

Absolutely Ascot hunk Rudi Hewitt then caused a row when he cheekily told them all: “Maybe you could join in and have a three-way thing.”

The comment left Megan furious because she hates it when people sexualise a same-sex romance.

She said: “The guys are so jarring. It’s like, ‘two hot lesbians, ooh can we join in?’. Absolutely not. It just makes me cringe how everyone makes it a sexual thing.”

She then added: “It doesn’t matter if you’re male or female. It’s a connection I have with someone. Why has it always got to be sexual? It’s not that vibe.”

The bust-up continued and later she told pals: “Everyone tries to sexualise lesbians and girls who like each other and I’ve gone along with it and laughed and joked.”

And she added: “What’s really p***ing me off is every guy sees lesbian girls as something that’s there for men. It’s so annoying.”

The scenes will air in this week’s episode, which is tonight at 10pm on MTV.

Meanwhile, Megan recently admitted to Metro that she was "obsessed" with former glamour model Katie Price at one point, revealing that she was an inspiration to her.

She said: "Yeah, definitely. I was obsessed with Katie Price growing up, I wanted to be her and girls of the Playboy Mansion.

"I think it’s the whole aesthetic, they’re like little Barbie dolls. I’d always perv on Page 3, I’d be like, 'Ooh, these boobs, what boobs would I have?'"

The star also confessed that she was asked to ditch her OnlyFans account before joining Love Island, but she soon returned to the website and has since made a fortune.