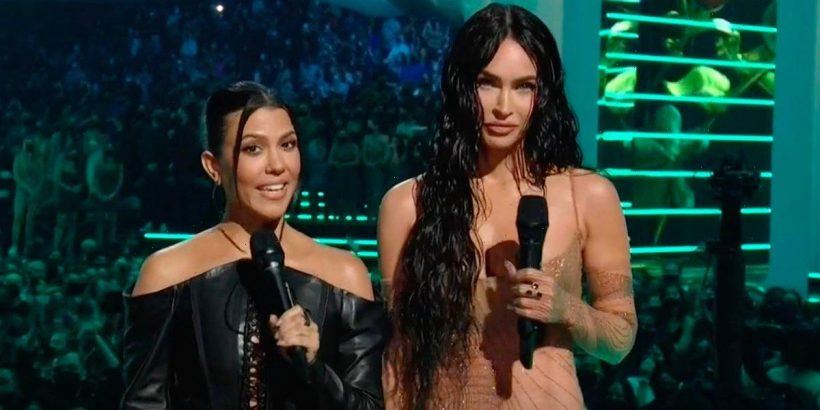 Megan Fox and Kourtney Kardashian caused quite a stir as they introduced their boyfriends as their "future baby daddies".

Megan, 35, and Kourtney, 42, took to the stage at the MTV Video Music Awards to introduce Machine Gun Kelly and Travis Barker's new single Papercuts which closed the show.

They then went on to show how much they loved their boyfriends as Megan described them as "future baby daddies".

She said: "I'm a huge fan of this next performer. I've watched him grow, and not just as an artist, but also as a person."

Kourtney then replied: "I'm a fan too, and I think his drummer is super hot."

Megan then finished their conversation by saying: "New York, I need you to get extra loud for our future baby daddies."

Machine Gun Kelly and Megan have been going strong since Summer 2020 after having met in the previous March whilst filming Midnight in the Switchgrass.

The pair each have children from previous relationships as Megan has sons Noah, eight, Bodhi, seven, and Journey, journey, with ex-husband Brian Austin Green and Kelly is dad to daughter Casie, 13.

Kourtney wore a black lace up leather dress with her hair swept back into a bun which complimented Travis' black suit with spiked shoulders.

The pair went Instagram official back in February as they posted the same photos of a fireplace.

They each have children from previous relationships.

Travis has a son Landon, 17, and daughter Alabama, 15, with his ex Shanna Moakler, and also considers Shanna's daughter Atiana, 22, his own as well.

Kourtney and Travis recently documented a romantic trip they went on together.

They enjoyed time together in Mexico, Italy and France.

Each of them took to their social medias to post loved up photos of the couple.

They also took some time to visit local sights such as enjoying a day in Disneyland Paris.