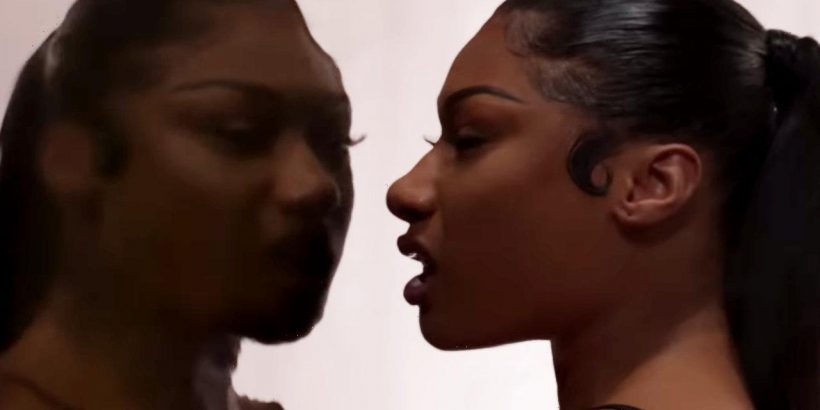 The racy visuals, which was released on Thursday, June 2, showcases the Grammy-winning female rapper going naked while rapping her vicious bars beneath the water.

AceShowbiz –Megan Thee Stallion‘s recent single “Plan B” gets a steamy visuals treatment. Released on Thursday, June 2, the music video sees the scantily clad femcee showing off her curve in front of a black backdrop.

In the footage, the 27-year-old rocks some sexy black bodysuits. At some points, she goes naked while smoking and even rapping beneath the water. The Houston native covers her assets only with her hands.

Megan debuted the track at the Coachella Valley Arts & Music Festival in Indio, California before releasing it around one week later. In the song, which samples Jodeci and Wu-Tang Clan’s “Freak’n You Remix”, she raps, “Dear f**k n***a/ Still can’t believe I used to f**k with ya/ Poppin’ Plan Bs ’cause I ain’t plan to be stuck with ya/ Bam, I see you still kick’ it with them opp b***hes.”

Many assumed that “Plan B” is Megan’s diss track aimed at Tory Lanez. “Not Megan eating Tory Lanez up on her new song,” one person wrote on Twitter. Someone else added, “Megan Thee Stallion took shots at @torylanez during #Coachella.” A third then opined, “I love the fact that Megan made that song performed at Coachella and Tory lanez can’t say s**t.”

The drama between Megan and Tory happened after the “WAP” hitmaker got shot in the foot after a party at Kylie Jenner‘s house in July 2020. She claimed that the Canadian rapper was the one who fired at her.