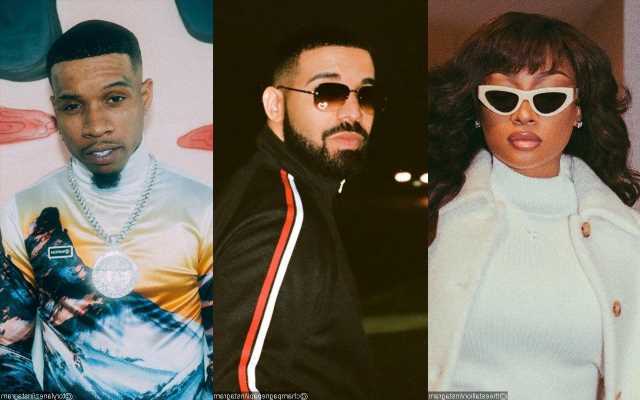 The drama begins after the Canadian rapper seemingly disses the Houston Hottie on his newly-released track titled ‘Circo Loco’ from his new joint album with 21 Savage.

AceShowbiz –Megan Thee Stallion‘s legal team has issued a response after Drake released what appeared to be a diss track titled “Circo Loco”. In the statement, attorney Alex Spiro slammed “silly” Drizzy for doubting that the Houston Hottie was shot by Tory Lanez.

In a statement to TMZ on Friday, November 4, Meg’s lawyer Alex said, “Despite the irrefutable evidence that Megan was a victim of gun violence, the ignorant continue to support her attacker.” The attorney further stressed, “I know many of the folks across the industry, but those people are going to look very silly when the facts fully come out.”

Alex continued by saying Megan is confident because of the evidence. “These things you know are irrefutable and can’t be cross-examined, and the truth usually comes out in courtrooms.” He added, “I can tell you in all the high-profile wars and the circuses, I’ve never seen a situation where people are going to the defense of a man who shot a woman.”

The track, from Drake and 21 Savage‘s joint album “Her Loss”, sees Drake making an apparent reference not only to Megan but to the 2020 shooting incident in which she was allegedly assaulted by Tory. “This b***h lie ’bout getting shots but she still a stallion,” the Canadian rapper spits on the song. He continues, “Shorty say she graduated, she ain’t learn enough/ Play your album track one, ‘kay, I heard enough.”

A few minutes following the song’s release, Megan urged artists to stop using mentions of the shooting “for clout” in a series of furious tweets. She also said she’s looking forward to when “the mf facts come out.”

“Stop using my shooting for clout b***h a** N***as! Since when tf is it cool to joke abt women getting shot !” Meg fumed. “You n***as especially RAP N***AS ARE LAME! Ready to boycott bout shoes and clothes but dog pile on a black woman when she say one of y’all homeboys abused her.” She continued expressing her disgust as writing, “And when the mf facts come out remember all y’all h*e a** favorite rappers that stood behind a N***a that SHOT A FEMALE.”

However, many social media users later called out the “Savage” raptress for “doing too much” whenever she defends herself. “People attack me y’all go up for it , i defend myself now I’m doing too much … every time it never ends and this did NOT happen until I came out and said I got shot …,” she responded. Seemingly getting tired of the drama, the 27-year-old femcee concluded, “y’all don’t fwm okay cool f**k it bye.”

Others, in the meantime, urged Meg’s boyfriend Pardison Fontaine to step up after Drake appeared to diss his lover. “So is Pardi gonna get big and confront Drake of ???? Lol,” one person tweeted, with another adding, “why is this woman fighting battles against men DO SOMETHING N***A @pardi DAMN.”