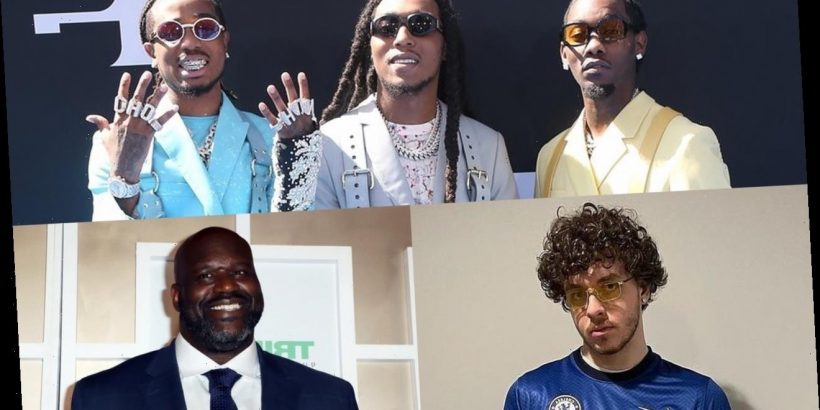 The retired basketball player is staging a star-studded livestream featuring the likes of Diplo, Nelly, Olivia Culpo, and Winnie Harlow ahead of the highly-anticipated football game.

AceShowbiz –Migos and Jack Harlow are among the stars set to take to the virtual stage for Shaquille O’Neal‘s “Shaq Bowl” livestream event this Sunday (07Feb21).

The U.S. group and rapper are on the line-up for the hotly-anticipated three-hour event, which kicks off at 3 pm ET on O’Neal’s Facebook page as well as on SHAQbowl.com.

And as well as musical entertainment from the sportsman’s famous friends, he will also be pitting celebrities against each other in a series of challenges.

Diplo, Nelly, Olivia Culpo, and Winnie Harlow are among the stars taking part in the celebrity face-off, while Migos stars Quavo and Offset will be playing on different teams.

The SHAQ Bowl event will stream live from Tampa, Florida, from a custom-built stadium, ahead of the Super Bowl kick-off at 6.30 pm ET.

This coming Sunday Super Bowl will be a face-off between the Tampa Bay Buccaneers and the Kansas City Chiefs. H.E.R. is set to perform patriotic song “America the Beautiful”, Eric Church will team up with Jazmine Sullivan to deliver “The Star-Spangled Banner”, and National Youth Poet Laureate Amanda Gorman will recite an original poem to honor COVID-19 pandemic heroes.

For the half-time show, The Weeknd is tapped as the headliner. His performance will be slightly different from those of the performers in the previous years due to the ongoing coronavirus concerns.

His gig will be set in the stands at Raymond James Stadium in Tampa, Florida. Performers traditionally take over the centre of the field after the first half of the big game, but health and safety restrictions have driven the “Blinding Lights” singer to the terraces.

There won’t be any special guests either during his performance.