Electro-folk? Atmosfolk​? Are these new sub-genres of folk music? No, simply variants of that haunting ambience that was the stock-in-trade of Daniel Lanois​ (courtesy of Brian Eno) when he produced Emmylou​ Harris' Wrecking Ball and Willie Nelson's Teatro​. Take two Irish singers, Gemma Doherty and Morgan MacIntyre​, set their sweet vocals and harmonies against minimalist electronica, discreet percussion and some understated Irish harp (on Shape of Silence harp and synthesiser blend perfectly), and the result is the most beautiful sound to come out of Ireland since Clannad​ and Enya​. The mood, inevitably, tends towards melancholia, but there are moments of brightness: Twin Peaks (with references to the TV show) is positively bouncy, You Never Call has ABBA-like pop moments and Steady sounds like it has been produced by Kraftwerk​. Still the album's true highlights occur when the women's voices weave something heavenly and magical against a backdrop of electronic washes. To listen to Tir Eile​ – two voices, a choral and electronic background, and an ambience that evokes the west coast of Eire​ – is to be swept into the magic of mythical Ireland. BRUCE ELDER 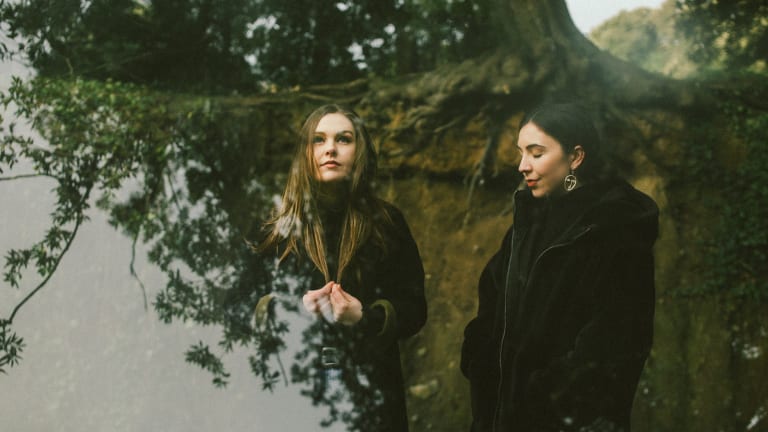 Saint Sister: the most beautiful sound to come out of Ireland since Clannad and Enya.

You know that wild, spiralling look in the eyes when a border collie suffering cabin fever is suddenly released into a park or paddock? This music is the sonic equivalent, played with such ferocious intensity you'd think that Natsuki​ Tamura​ (trumpet), Alister Spence (keyboard, electronics), Satoko​ Fujii​ (piano) and Ittetsu​ Takemura​ (drums) had been locked in the band-room for a year, before being unleashed upon an unsuspecting Tokyo audience. Their sound may enter your body conventionally enough via the ears, but it rushes straight to the central nervous system, so you seem to feel it with every nerve-ending. Call it aural electricity or sonic fire-storms, it sustains peak excitement for surprising swathes of time, and when the fury relents a creepy intensity is maintained. The piano, drums and Fender Rhodes create such density and mass as could flatten the faint-hearted, and Tamura​ drives through these maelstroms like his trumpet has a light-switch for high beam. Turn it up and be alarmed. Fujii​ and Spence have also released a duo album, Intelsat, which has more air, but no less ferocity of imagination. Kira Kira plays Foundry 616, November 14. JOHN SHAND

He's part-high plains drifter, part-cowboy mystic, lying somewhere on a line between Harry Nilsson's sepia-tinged '70s laments and Bon Iver's​ beardy soul-scraping. On the new Phosphorescent album Matthew Houck​ continues the sonic arc he started with 2013's Muchacho and the ubiquitous track Song For Zula​, which wrapped U2-like dynamics around the central thread of Johnny Cash's Ring Of Fire. On C'est​ La Vie No. 2 he aims for nothing less than Dylan or Cohen. The instrumentation trickles and pumps as he assembles mirrored lines about past and present: "I stood out in the night in an empty field and I called your name, I don't stand out all night in empty fields and call your name no more." The backstories​ to past albums have involved break-ups, upheavals and enforced isolation. C'est​ La Vie is different: love, fatherhood, moving from Brooklyn to Nashville, building a studio. That may suggest settling down, but it seems to have helped Houck​ drill down into more elemental songwriting, while continuing to be a genre-wanderer, from the skittery​ calypso of New Birth In New England to the Krautrock-meets-Velvet Underground sprawl of Around The Horn. BARRY DIVOLA​

This sees Atlanta's brightest stars, Lil Baby and Gunna, team up for their first collaborative album. After developing a charming formula on joint singles, the young rappers have found a captive audience in jaded hip-hop fans with melancholic ballads dusted in autotune​. This year hip-hop surpassed rock to become the most popular genre, but a subsequent dip in quality has made listeners weary. Lil Baby and Gunna's dexterity offers a beacon of hope. Both are proteges of Atlanta pioneer Young Thug, and while his influence is palpable, this record sees the youngsters surpass him. Features from Drake (Never Recover), Lil Durk​ and NAV (Off White VLONE​) are a welcome indulgence for those who savour star-studded hits. But Lil Baby and Gunna shine on their own. Baby's melodic vocals are soft around the edges in parallel with Gunna's disparate flow on Business Is Business. Belly, Lil Baby's solo moment, is an infectious coupling of pop and R&B, and Gunna follows with World Is Yours, matching him bar for bar. They bounce off one another with the sophistication of a relationship that spans decades, while growing with each collaboration. Drip Harder may just be the beginning. KISH LAL

Nebraska's Cursive may not be a household name in Australia, but their cult-like following in indie-rock circles has kept fans eagerly awaiting every release since their 1997 debut. They are known for their acerbic, vitriolic and cathartic lyrics from singer Tim Kasher, and Vitriola​, their eighth album, comes with the added bonus of anxiety and dread linked to the world's current state. This, however, isn't a bad thing. Opener Free To Be Or Not To Be You and Me is a dense, tense listen, with Kasher's voice following the rhythm of the crunching bass, and it sets the scene for an album offering little reprieve. While the more clear-cut melodies of acclaimed 2003 set The Ugly Organ may not be immediately present, they slowly reveal themselves, first on tunes like the more down-tempo Remorse and late-album standout Ghost Writer. Kasher, who has made a career outside of Cursive with solo albums and the folk-oriented the Good Life, has always felt most at home delivering the melodrama and angst out the front of this band, and while the last few records have fallen short, it seems Trump's America is just the place to reignite the fire. BRONWYN THOMPSON

Is this the year's angriest record? Marc Ribot is sick of seeing his Brooklyn friends and neighbours randomly arrested by the US Immigration and Customs Agency (contemptuously known as "La Migra​"). When he's not baring his punk roots in tsunamis of fury like Personal Nancy, Muslim Jewish Resistance and F— La Migra​, he can turn to caustic satire, as on the world-beat Pennsylvania 6 6666, with its spitting commentary on cosy white homogeneity. Setting Ceramic Dog apart from other post-punk operatives is the fact that Ribot (guitar, vocals), Shahzad​ Ismaily​ (bass) and Ches Smith (drums) come from the pinnacle of New York's creative music scene, so no idea is off-limits and their imaginations range just as far as their virtuosity. Yet for all the sophistication at their disposal they prefer to preserve a garage-band rawness, even when they approach the relative tenderness of the title track, with its coiling, intersecting guitars. Ultimately I prefer the extended, psychedelic-tinted blowing on the humorously titled Shut That Kid Up and the even more bewitching Orthodoxy, underpinned by Neel​ Murgai's​ sitar. Angry, brilliant and sometimes plain beautiful, this album is certainly different. JOHN SHAND