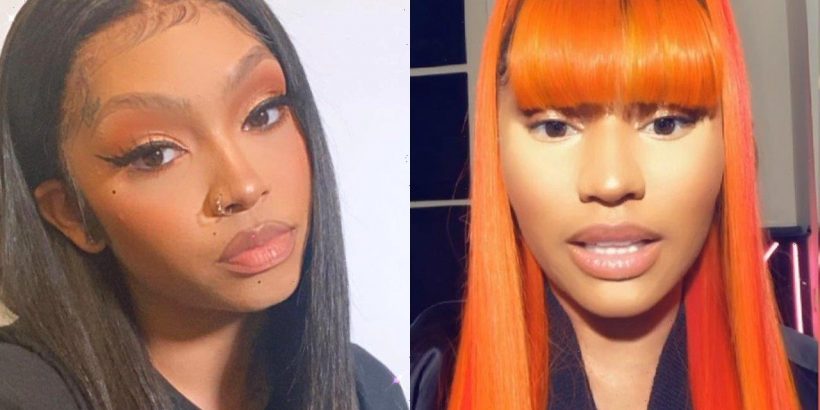 Informing her Instagram followers that there is no beef between her and the ‘Let It Blow’ raptress, the ‘Starships’ hitmaker vows she will ‘never correct a lyric ever again.’

AceShowbiz –Nicki Minaj has made it clear that she has no ill will toward Cuban Doll. Despite publicly correcting the “Let It Blow” raptress after botching her verse on “Crocodile Teeth (Remix)”, the “Starships” hitmaker insisted she was not trying to “embarrass” her.

The 38-year-old star offered her message via Instagram Story on Saturday, May 22. “I hope y’all know I love Cuban, I was havin fun w/ her. I don’t try 2 embarrass ppl I fuk wit. That’s corny. I’ll never correct a lyric ever again chile. Boom,” she pointed out.

Nicki’s post came after Cuban shared a steamy photo of herself where she misquoted the former’s lyrics. “My type of gal wanna know da opps out,” the 23-year-old penned in the caption, to which the “Bang Bang” femcee replied in the comment section, “Might tek a gyal man, I know the opps out.”

Upon learning herself being corrected in public, Cuban admitted to feeling ashamed for it. Sharing a screenshot of Nicki’s reply, the “Drug Dealer” raptress wrote, “I’m so embarrassed,” adding a crying face emoji.

Nicki, whose real name is Onika Tanya Maraj-Petty, dropped “Crocodile Teeth (Remix)” on May 14 as a part of the re-release of 2009’s “Beam Me Up Scotty” mixtape. After it sold eighty-thousand units, she made use of Twitter to thank her online devotees for her success.

“80K wow,” she raved. “My 12 year ago self would be so proud. No videos, lyric videos, no tik tok challenges, no radio & no heavy playlisting due to it coming as a surprise. Didn’t even drop w|clean versions to the songs. Long live #BeamMeUpScotty I love you guys so much. Thank you so much.”

Nicki has just done taking a break from the music industry. Speaking about her hiatus, she told her fans on Twitter, “I appreciate u guys so much for waiting. But yea, very much needed that zen for important bonding time w|my son, getting back fluid w|writing & smthn else I don’t want to discuss yet. If u know u know.”