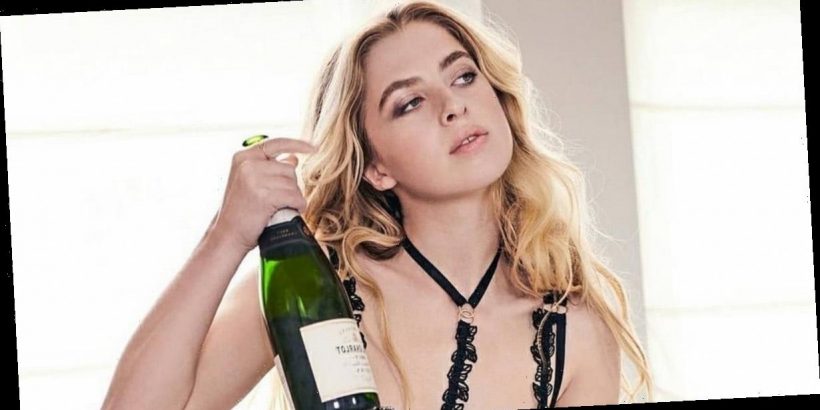 Anais Gallagher has seemingly followed in her Oasis father Noel Gallagher's footsteps after finding herself at the core of controversy in recent years.

The 20-year-old became a talking point after her lead singing uncle Liam, was forced to issue a public apology directly to her and his mum Peggy as his on-going feud with his brother ruptured within the family.

Last year, the aspiring model also sent shockwaves across the internet as she ditched her clothes, putting on quite a risqué display that her dad had no idea about.

If that wasn't enough for adding insult to injury where Noel was concerned, she was also at the centre of an on-going war between her father and singing sensation Lewis Capaldi back in 2019.

Letting it be known that she was allowing Noel to fight his own battles , Anais shared an intimate moment with the Someone You Loved hitmaker that caused quite a stir.

From family feuds, a scandalous kiss and racy lingerie reveals, Daily Star has uncovered it all.

In 2019, Anais somehow found herself getting dragged into the ongoing feud between the two Oasis brothers after it was claimed she had received a "threatening text" from Liam that took aim at her step-mum Sara MacDonald.

Noel's wife and Liam, 48, battled it out on social media but the frontman decided to engage Anais, warning her to tell Sara to "be very careful".

It was unknown that Anais had been involved until Liam was forced to apologise after Noel had leaked his messages over Twitter.

The text read: "Tell your step Mam to be very careful" and signed off with: "My sincere apologies to my beautiful mum Peggy and my lovely niece Anais for getting caught up in all of this childish behaviour I love you both dearly LG x."

Very much like their famous father's Anais and Liam's youngest son Gene entered into a bitter war of words that saw social media erupt.

It got heated between the pair after Noel's daughter touched a nerve discussing "genetics" which didn't sit well with her cousin.

Gene, who is also the son of All Saints star Nicole Appleton, took to Twitter to pen his fury – much like his dad.

His tweet read: "I didn't wanna have to make another tweet but someone informed me that Anais has been chatting more s**t about genetics and what not…

"Firstly, u look like ur dad [with a] blonde wig on…

"Secondly, u model coz u look like ur dad not coz of who u are nobody cares about who u are lmao."

However, the teen appeared to have a change of heart and later deleted his initial posts opting for a more indirect tact instead.

Gene then took aim at his blonde model cousin with a final follow up message: "Never will u ever see me attend a celebrity driven, posh rubbernecking, kids culture club…

"Whoever got to chose who got to model for Tommy Hilfiger is a complete doughnut who should go spec-savers."

In October last year, Anais caused quite a heat surge as she unleashed an abundance of sexy lingerie snaps that she'd kept a secret from her father.

The bombshell looked stunning as she struck up a number of poses next to a standing bathtub wearing sheer black underwear and chunky boots.

Another image saw Anais rocking a killer red halterneck bodysuit with her highlighted tresses tumbling down her back.

Speaking to the MailOnline about the steamy photoshoot, she explained: "My dad doesn't know about the pictures. I've not told him."

Insisting that it wouldn't be an issue, Anais added: "He knows I'm an adult who is quite vocal about my life and about what I choose to do."

In 2019, Anais added salt to her father wounds after she shared an intimate moment with his arch-enemy Lewis Capaldi.

At the time the High Flying Bird's star had beckoned a war with the Scotsman after he blasted him in an interview with Variety.

Speaking about the young songwriter, he told the publication: "F****** Chewbacca he should enjoy his 15 minutes.

"The greatest day of his life that I slagged him off or called him an idiot.

"It's the greatest day of his f***ing life so far. He's just thinking 'wow'. Well, I know you're Scottish and all that but f***ing hell. It is like a third world country but for f***'s sake, man, you must have had a better day than this. Surely."

Anais proved that she wasn't getting involved in another one her dad's battles and took to Instagram to share an intimate image which saw Lewis cupping her face with his hand while planting a kiss on his cheek.