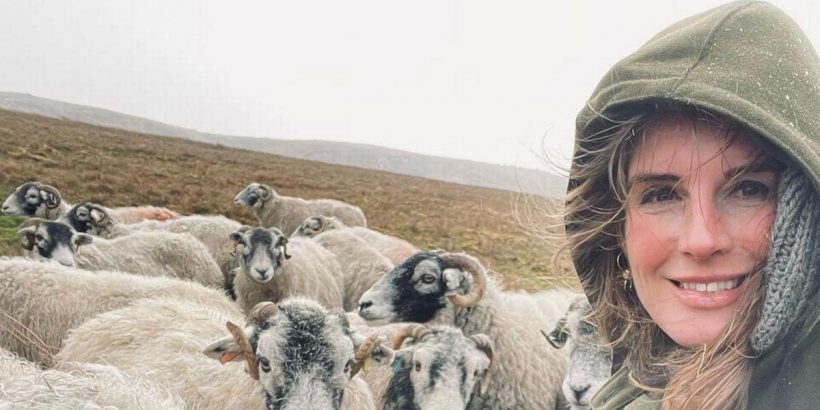 Our Yorkshire Farm star Amanda Owen has wowed fans with glamorous selfies, which she shared on Instagram.

The shepherdess looked stunning as she posed for the first selfie on her farm, with sun-kissed glowing skin and hair flowing past her shoulders.

In another photo, Owen can be seen looking away from the camera, wearing a stylish black top, with her fringe pinned back in the beautiful selfie.

She took the selfies while working on the farm, saying in the caption on social media, "Dropped off in pickup to walk back through the pastures where there is a gap in the wall.

"The gimmer hoggs (young females) have found it and escaped."

Owen shared photos and videos of the animals that had adventured through the gap in the wall, along with photos of her dog during her walk.

Fans on social media called the selfies of Owen "stunning", with one saying "lovely pictures."

Another said, "beautiful lady", while another fan said, "you all work so hard! You're looking amazing."

Amanda Owen is one of the stars of Channel 5 series, Our Yorkshire Farm, which is watched by over four million people and follows a family on their 2,000 acre farm.

The Shepherdess lives with her husband Clive, 66, who she met in 1996.

After marrying in 2000, they became parents to their nine children, who all grew up on the farm and have learnt the skills needed to work on the site.

Talking to website Welcome to Yorkshire, Owen recently revealed that she never planned to have such a big family.

"You must bear in mind that there never was a plan," said Owen.

“There was never any family planning certainly."

Owen said, “there never has been a plan, and I think that is probably what has brought us to where we’re at now.

“The best-laid plans and all that, you know what happens to those, so we just go with the flow, take whatever comes our way and count our blessings.”