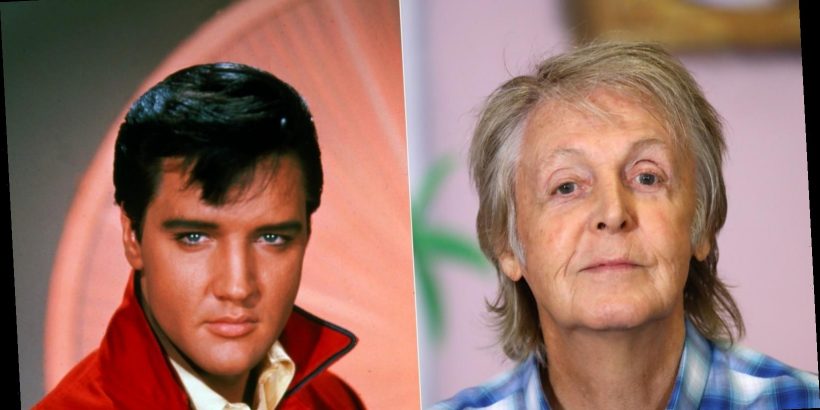 Paul McCartney is a legendary music icon who has always been the epitome of cool. A former member of The Beatles, he co-wrote many of their hit songs, like “Eleanor Rigby” and “Yesterday,” with the late John Lennon. McCartney also had a successful career as a solo artist, but you may also know him from his collaborations with Kanye West and Rihanna. The multiple Grammy winner is also an activist, frequently speaking out about animal rights and supporting vegetarianism since the 1970s.

While McCartney is truly iconic, he also has opinions on other music legends, like Elvis Presley. McCartney and Elvis were actually contemporaries, both popular in the 1960s. But how did they feel about each other — were they friends, or music rivals?

Nearly 60 years later, McCartney revealed how he felt about Elvis in a December 2020 episode of The Adam Buxton Podcast. Read on to find out what the former Beatle had to say about the King of Rock ‘n’ Roll.

On The Adam Buxton Podcast, the host asked the 78-year-old musician who the coolest person he ever met was. At first, Paul McCartney answered his wife, Nancy Shevell, who he noted was listening to the recording, but still maintained she was the coolest.

But after that, the former Beatle said, “I have met Elvis Presley, who was darn cool. Because this was pre-his Las Vegas and the rhinestone suit [period], this was just sort of Beverly Hills. So he was really cool.” McCartney also mentioned meeting some other pretty iconic musicians in the 1960s and ’70s, but still ranked Elvis above any of them.

In 1969, Elvis headed to Las Vegas for a career-defining four-week show residency at the International Hotel, according to Time magazine.

When Buxton, the podcast host, asked to rank his wife and Elvis in terms of coolness, McCartney said Elvis ranked second to his wife. So, what exactly happened when McCartney met the King?

When did Paul McCartney meet Elvis?

According to the BBC,  Elvis and Paul McCartney met only once, on Aug. 27, 1965. The Beatles had a night off from their United States tour and they were invited to the King’s Beverly Hills mansion. All four Beatles members did so under one condition: they didn’t want any media outlets invited, so there are no photos or recordings available of this legendary event.

The Beatles’ press officer at the time, Tony Barrow, recalled what happened at the meeting to the media outlet. At first, The Beatles and Elvis made awkward small talk. Barrow told the BBC, “Apart from anything else, I think it was just that each was in awe of the other. Elvis didn’t have that much confidence, as far as I could see. He was a fairly easily embarrassed person by the look of him.”

Of course, the gathering of music legends went smoother once music got involved. Barrow told the BBC that Elvis quelled the awkwardness by handing out guitars and bringing in a piano for an impromptu jam session. It made all the difference. “The boys found that they could make much better conversation with their guitars than they could with their spoken word,” Barrow said. “Music was their natural meeting point, their most intelligent means of communication.”

Elvis was far from the only music icon that McCartney has encountered over the years.

How does Paul McCartney feel about other musicians?

Additionally, Paul McCartney talked about how he feels about many other musicians during his appearance on The Adam Buxton Podcast. He spoke about another 1960s contemporary: Bob Dylan, known for such hits as “Like a Rolling Stone” and “Tangled Up in Blue.” McCartney reminisced to Buxton about meeting Dylan for the first time at the Del Monaco Hotel in New York City in 1964. The Beatles hung out with the rocker, who McCartney also called “cool.” In the following years, McCartney said he and Dylan continued to hang out. McCartney said, “He’s a great bloke.”

He also had good things to say about David Bowie on the podcast. McCartney said that the late Bowie, famous for 1970s hits like “Space Oddity” and “Under Pressure,” was another cool musician he encountered.

Even now, McCartney is an artist who supports other artists. In December 2020, McCartney tweeted support for Taylor Swift’s latest album, evermore. “Congratulations to my friend @TaylorSwift13 (and her boots) on her wonderful ‘#evermore’ album charting at #1 in the UK this week and no doubt US on Sunday,” he wrote, alongside a video slideshow of McCartney helping Swift take off a boot stuck on her foot.

It seems that McCartney has nothing but love and support for his fellow artists — past and present.