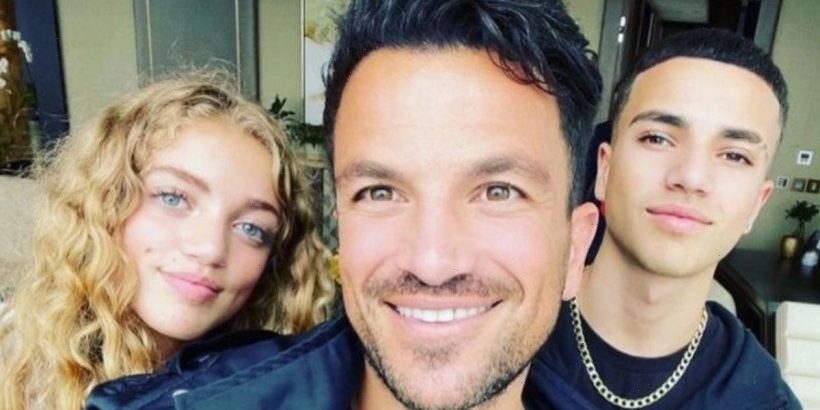 Peter Andre shocked fans with a throwback photo of his brother Michael – as they thought he was the "spitting image" of Peter's son Junior.

The reality star took to Instagram on Thursday (May 19) to pen a sweet birthday tribute to his sibling, who he thought looked like pop singer Bruno Mars.

Peter shared two snaps of his beloved brother Michael in front of his 1.8million followers.

The first photo was a selfie showing Pete and Michael, but the second was an old photo harking back to Michael's days as a young schoolboy.

Young Michael was rocking a curly hairdo and a smart red and white shirt.

"Love you brother and have a great day @mrmichaelandre1 @brunomars"

Michael replied beneath the post: "Thank you brother!!!! Love you man"

Peter's fans loved the sibling snaps and many rushed to send their own birthday wishes to Michael, but it's clear the commenters thought he looked a lot like Peter's son Junior.

A third said: "Wow see junior in him both handsome"

Peter's son Junior is following in his singer dad's footsteps by forging his own pop career.

The elder Andre, who co-parents Junior with his ex Katie Price, shot to fame with his sexy hit Mysterious Girl over two decades ago.

The teenager signed a dazzling deal with Columbia Records last year and is set to release his debut single this summer.

Proud dad Peter said Junior has his "own sound" which is "really current and really fresh".

He told The Sun: "My main thing has been to let him have artistic freedom.

"I've let him do it his way. He has his own sound. It's really current and really fresh."

Although Peter's proud of his son, the doting dad admitted he had fears for his son entering the music business.

He told new magazine: "Of course, there's a lot of fear, because you get thrown into the lion's den. But I'm hoping that with everything I'm telling him on a daily basis, he will be OK.

"We sit and we talk about things, and he knows I'm right next to him the whole time. It's unbelievable how similar we are."

Peter added: "Like me, he wanted to be an actor but he also has a talent for songwriting,"