Photographer Camila Falquez wants us to rethink what beauty means.

Such was the intent for the new installment of her photo series, Being, a collection of stunning portraits of diverse subjects from various marginalized communities celebrating their inherent beauty. Baring skin, wrapped in luscious silks, and posing like deities perched on pedestals, the models are captured like royalty and Classical art, owning spaces from which they’ve long been excluded.

“Beauty is a belonging—to ourselves, to our diaspora, to our deepest desires,” part of the manifesto, written by Jezz Chung, reads. “Beauty is trans. Beauty is masc. Beauty is femme. Beauty is non-binary. Beauty is always in evolution—a discovery and a discovering of who we’ve always been without the noise.”

Falquez first debuted Being last year, but after photographing 19 subjects, she felt that the project wasn’t finished. She wanted to make it bigger, and also move away from using white, Eurocentric influences.

“I think I based a lot of the iconography or references in a lot of European Renaissance art. And then, I realized that maybe we can also move past it, because that is such a white reference for beauty,” Falquez, who was born in Mexico and grew up in Spain, tells BAZAAR.com. “Maybe we can define what beauty is without white references.”

Whereas last year she did heavy research at the Metropolitan Museum of Art, the Louvre, and around Amsterdam, this time, Falquez focused on the individual and interpreted their own “regalness.” She was also more inspired by essays and writings rather than visual media. “A lot of books we get access to are written by white people about other cultures. So it’s not even that real,” she says.

“I feel like it’s more conceptual,” Falquez says of her approach for Being Part 2. “I don’t need to check all of these European paintings, because that’s not the only form of beauty. I feel like individually, we all bring into a room our own queen and our own king.”

Falquez chose a variety of subjects ranging from people she admires, musicians, and activists to people she ran into on the street. They represent Black, Brown, and LGBTQIA+ people; individuals with disabilities; and more. “There’s this moment where I look at them and I’m like, ‘Wow, look at this beautiful human being,” she says of finding her models. “And it’s super instinctual.” The pandemic made the production more difficult in a number of ways, from making it harder to find subjects because everyone was wearing masks to the emotional heaviness of working through a time when so many were grieving. “There’s a certain honesty, we’re less in a rush, and people come very vulnerable to the shoot,” Falquez says.

Being Part 2 officially launched on June 24. Prints of the portraits are now for sale online to raise funds for The Stonewall Protests, which organizes demonstrations by Black queer and Black trans activists centered on Black lives. But for a physical display, Falquez arranged a “Nomad Gallery” in the West Village ahead of Pride Weekend in New York City. A number of local businesses in the neighborhood—a laundromat, psychic, barbershop, locksmith, and curtain store, to name a few—will hang framed portraits from the collection in their windows until June 29. “All of them have been there for a long, long time and are getting kicked out, essentially, of the neighborhood,” Falquez says, adding that the area’s gentrification is also pushing out members of the LGBTQ+ community.

Part of her decision to create a gallery through the village was to challenge how accessible art should be. “A lot of it is rethinking, what is a museum,” she says. “I feel I’ve gone through that process this year, where I’ve gone to MoMA and the Met, and I’m like, ‘This is so out of touch with what’s happening in the world right now. This is so sterile. This is so unrelated to what we need.’ So this is almost like a claim to not needing those institutions to validate us.” 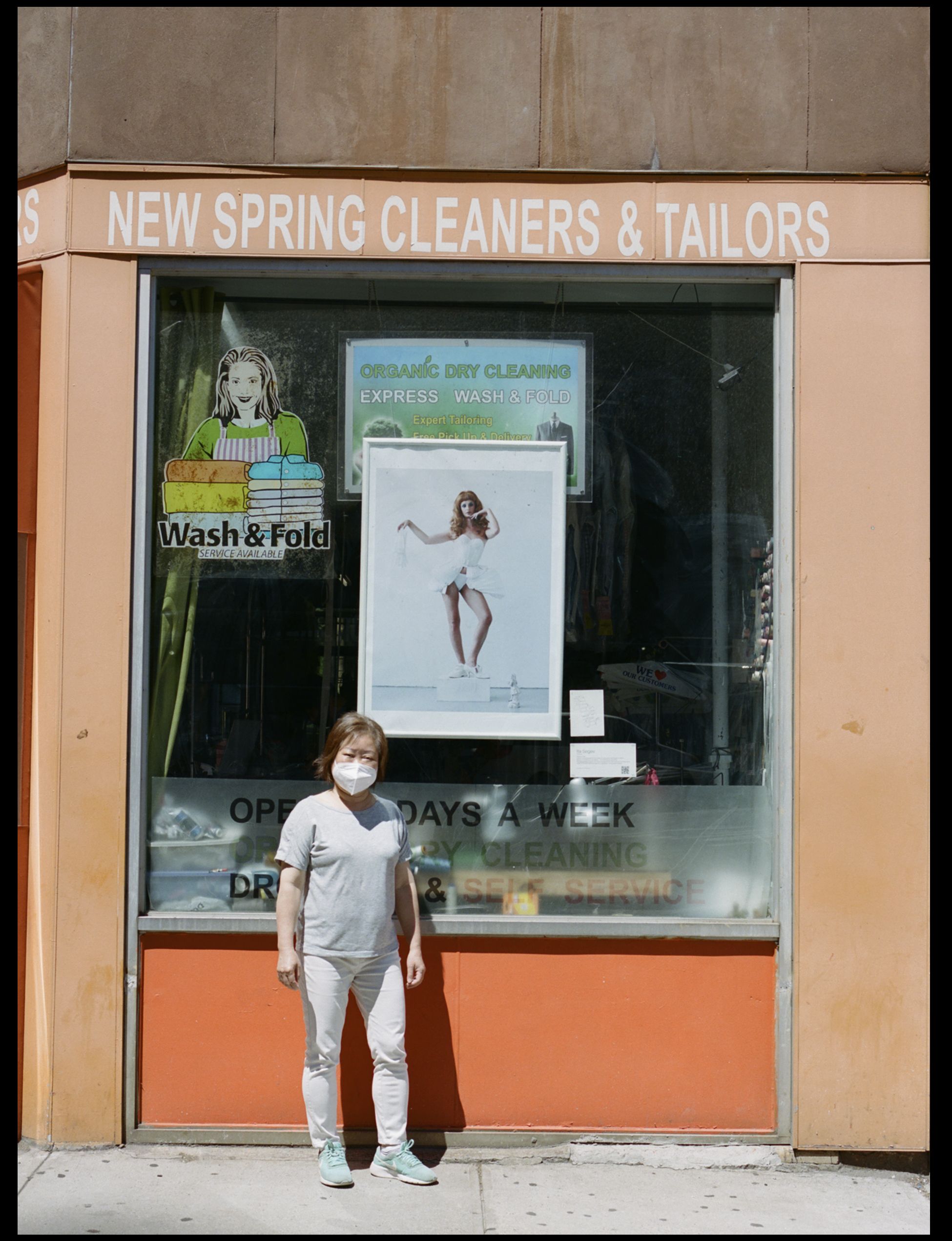 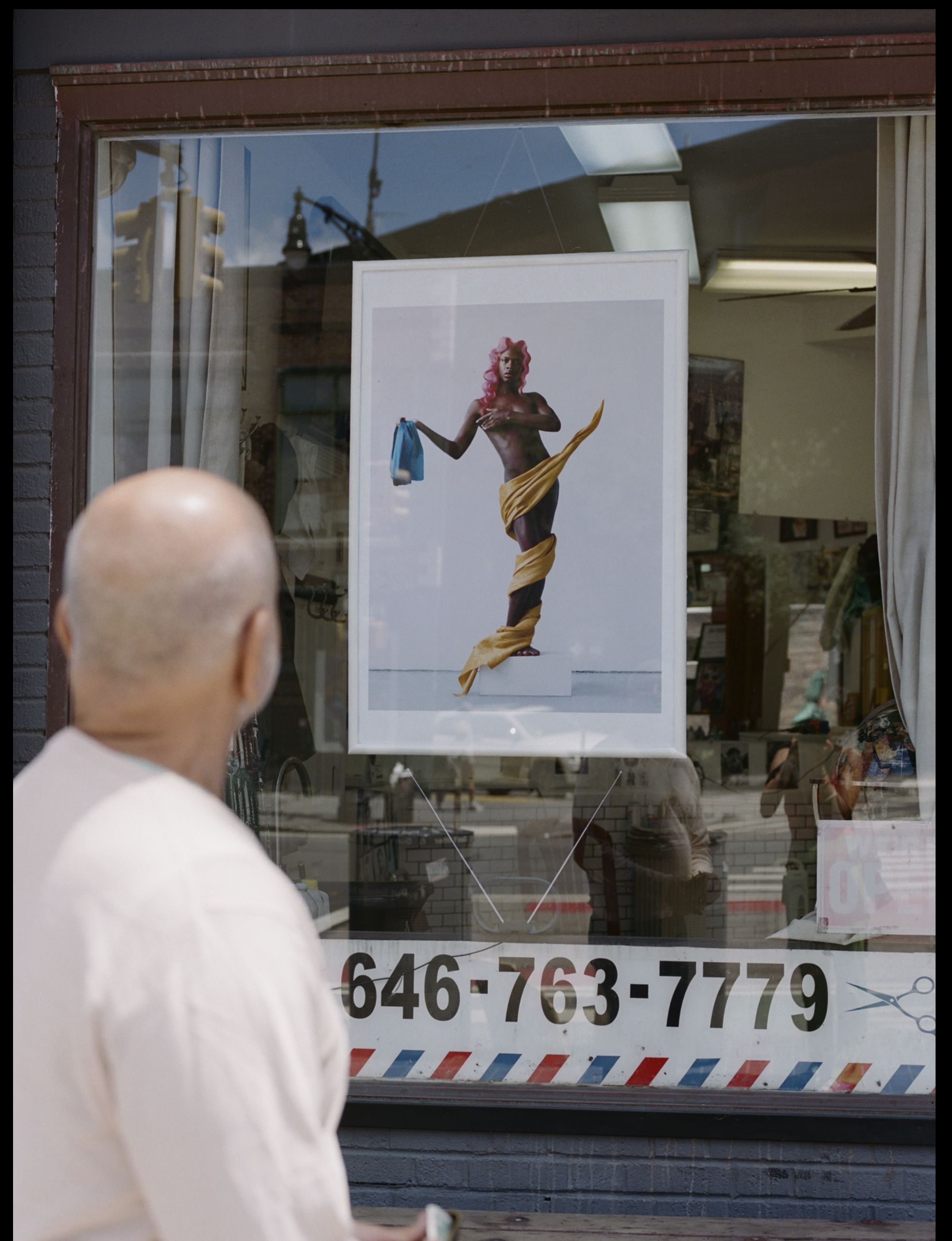 Whether you’re able to view the portraits in person in the streets of the Village or find them scrolling online, Falquez hopes that you don’t question them or their significance. “I hope that [viewers] see the beauty there is and that the barriers that we have to accept beauty universally are not there when they see these photos,” she says.