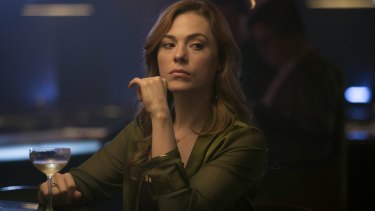 This stylish debut feature by Australian writer-director David Barker may have been done on a low budget but size doesn't inhibit its ambitions as it dials up from thriller to horror movie to a full-throated cry of revenge in just 80 minutes.

A few niceties to do with character and motivation are sacrificed along the way, possibly because so much energy and attention are lavished on the specifics of the blood-letting.

Sarah Montrose (Ella Scott Lynch) seems an unlikely party girl. When we first meet her, she's lying on a sofa, having fallen asleep over a book, but after a bit of thought, she zips herself into a tight dress, puts on stilettos and goes to a bar where she's soon being chatted up by Lewis (Benedict Samuel).

He's a smooth-talker whom we've already seen in action at a red-lit party scene fuelled by cocaine. After some rudimentary banter about the pros and cons of taking risks, she agrees to go home with him.

At least, that's what she thinks is happening. In reality, they're headed for a house belonging to the wealthy parents of Lewis' sleazy friend, Kenny (Robin Goldsworthy), where Sarah quickly learns she's the victim of a set-up.

Soon after she and Lewis begin making love, Kenny slips into the room in the dark and takes his place.

Her resulting fury claims Kenny as the film's first casualty, as well as forcing Sarah into a temporary alliance with her seducer. Unfazed by the gruesome death of his so-called friend, Lewis tosses her a shovel and suggests that they get on with the job of burying the body.

But first he finds time to engage in a brief debate with her about the ethics of helping to facilitate her rape, winding up with this summary. You either get what you deserve, he tells her, or you learn a valuable life lesson.

"Some women are inherently weak but you walk into a bar dressed like you were tonight and you have incredible power."

While these lines are as profound as the dialogue ever gets, the film's tone is given a boost by the calibre of the performances. Lynch has no difficulty in evoking the contrasting colours of Sarah's fractured personality and Samuel is creepily convincing as the glib and slippery Lewis.

There is also a welcome injection of new talent towards the denouement with the surprise arrival of Heather Mitchell and Lewis Fitz-Gerald as Kenny's parents, who are eager to know their son's whereabouts.

It's a slick film and Barker and his co-writer, Louise Mentor, keep the twists coming but it comes across in the end as a peculiarly mechanical exercise. It makes you jump but it doesn't make you care.