Four songs into Perth neo-psych act Pond's set, and it's hard to shake the sinking feeling that something is lacking. Maybe it's a decent mix – Joe Ryan's guitar is barely audible – maybe it's a decent song (although Sweep Me Off My Feet comes close). 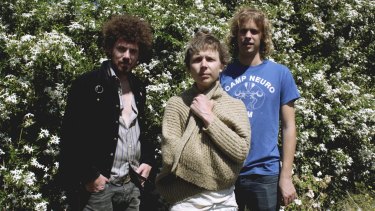 Pond – Joe Ryan, Nick Allbrook and Jay Watson – saved their best for last at the Metro.

It's not for want of trying by waifish frontman Nick Allbrook. When he's not busting moves like Jagger, the ex-Tame Impala bassist occasionally grabs a guitar to peel off an acidic lick or tweets into a flute for some Jethro Tull-esque prog rock action, yet a spark is still missing.

Until something magical happens.

A latin-infused disco beat is overlaid with a soaring guitar riff and a propulsive energy is unleashed on an epic jam of Don't Look at the Sun or You'll Go Blind from debut 2009 album Psychedelic Mango. When Allbrook launches himself into the crowd, singing The Prodigy's Firestarter in tribute to the late Keith Flint, Pond finally connects with the audience. It's such a markedly different moment that it seems hard to top, and it raises a question – have they peaked halfway through their set?

Following up with Burnt Out Star from new album Tasmania, it seems they have. Like so many Pond songs, there's a meandering, wandering start, in this case held together by a cascading keyboard line and some overwrought vocals from Allbrook, projecting his distinctly Australian voice as though he's playing the lead in a major musical.

But then he starts to fixate on a primeval chant, like a contemporary Damo Suzuki of krautrock pioneers Can. Delayed vocals build up, layer upon layer, a steady motorik beat kicks in, and band and audience ride a swirling, hypnotic groove in lock step.

The touch paper has been lit, and the good (rocket) ship Pond launches into space. The guitar lick from the Bee Gees' Jive Talkin' segues into the sunny pop of Paint Me Silver, which in turn leads into the triumphant rush of main-set closer The Weather.

An impassioned encore of 30,000 Megatons is succeeded by Giant Tortoise, its throbbing bassline giving way to an expansive ambient wash before a pummelling, jagged fuzz guitar sinks its hooks in.

Just like so many of their songs, Pond had saved the best until last, elevating what started as a sub-par performance into something special