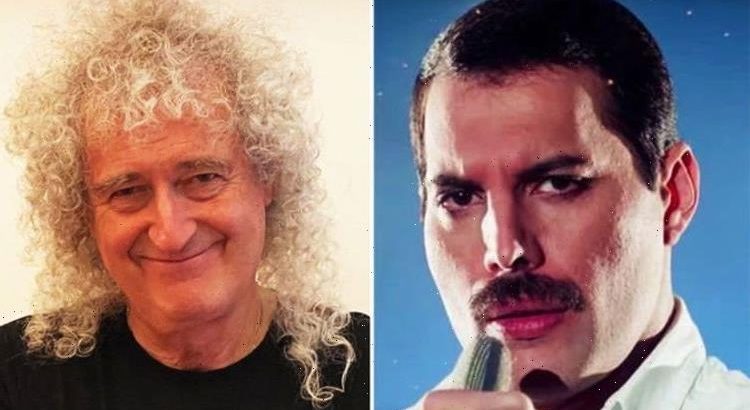 Brian is currently promoting the rerelease of his 1992 solo album, Back To The Light. Although it contains two Top Ten singles, Driven By You and Too Much Love Will Kill You, it has been unavailable for almost two decades. A new remastered edition with bonus material will be released on August 6. It was written during Freddie’s final months and the Queen frontman even famously took one of the singles for his own, recording the anthemic The Show Must Go On himself.

In a new interview today, Brian discussed his own personal grief at the time. The star was dealing with the impending loss of his bandmate, as well as the end of his first marriage to Christine Mullen, the mother of his three children. He also lost his father Harold to cancer that same year, in 1991.

Brian said: “I knew at the time that I wasn’t going to have Freddie anymore, but I was also losing my dad and losing my marriage and family. I was in a dark place, looking for the light.”

Incredibly, even though he was battling the final months of his own illness, Freddie’s thoughts were with his friend. Brian told The Telegraph: “He said, ‘We’re not talking about this, but we know I’m not going to be around for a lot of this future, and this is the time when you should be stepping up.’ It was a very, very brave thing for Freddie to say in a very matter-of-fact way.”

The band had also been recording music for their last album together, Innuendo, in Switzerland in 1990, with Freddie determined to lay down as many final vocals as he could, before his health failed completely.

Brian added: “At that moment, it wasn’t about my pain anymore, it was about Freddie’s battle. It was the same thing with The Show Must Go On. I wrote it, with a little bit of help from Freddie, and it was about a clown who is trying to keep his smiling face on. It was left unspoken that this could be Freddie’s life.”

DON’T MISS
Brian May calls on Queen fans to help get to No 1 – ‘I need an army!’
Lisa Marie Presley brother: Who is Lisa Marie’s brother Navarone?
Queen’s Bohemian Rhapsody lyrics – We all get the same line WRONG

Brian and Roger Taylor have often spoken of Freddie’s extraordinary final burst of creativity and the staggering strength of vocals, despite the weakness of his body.

In the new interview, Brian describes the remarkable recording sessions for The Show Must Go On.

He said: “When I gave him the final version to sing, it was like taking the lid off a bottle that was about to explode. He put so much energy into it.

“Freddie was just full of passion. He was always inspiring. Always.”

The iconic video features archive footage of Queen on stage and filming other videos, as well as new scenes with Freddie and his bandmates larking around. Freddie famous has a bunch of bananas on his head, while Brian strolls with a miniature penguin.

Although Brian and everyone else at the time thought that the death of Freddie was also “the end of Queen”, the band’s music and legacy lived on and have found a second life with the addition of current frontman Adam Lambert.

Brian has also continued to immerse himself in his twin loves of astronomy and stereoscopy, as well as to campaign on eco-issues, but music remains at teh core of everything.

He followed Freddie’s advice and recorded and released Back To The Light in 1992. He found himself listening to the album in full during lockdown last year as he wrestled with a series of health issues and his own personal demons.

He said: “I thought: ‘I still am the same person. I still have the same struggles, the same pain, the same passion.’ It was at the end of Queen, and I wanted to find a new light, a new path, and this was it. And it still is it, in a way.”

BRIAN MAY INTERVIEW IN THE TELEGRAPH