Jack White‘s long-dormant side project the Raconteurs will celebrate the 10th anniversary of their second album Consolers of the Lonely with a deluxe reissue that will sport the band’s first new songs in 10 years.

Consolers of the Lonely: 10 Year Anniversary Special Edition, the latest installment in the Third Man Records Vault series, will come with a special 7″ boasting two songs from the Raconteurs’ “recent sessions that will ultimately result in a new Raconteurs album in 2019,” Third Man announced, adding the songs won’t be revealed until the reissue arrives in Vault members’ mailboxes.

“Pressed on incredibly unique magnificent copper foil vinyl, this is the first time the double LP has EVER been made available on colored vinyl,” Third Man Records writes.

“Coupled with a slightly re-imagined front cover highlighting new metallic accents to the iconic tintype image (after all, tin IS the traditional gift for a 10 year anniversary), this release was mastered directly from the original 1” master tapes and lovingly pressed at Third Man Pressing in Detroit, Michigan.”

The 10th anniversary package also comes with “a 4″x4” Copper and Black “R” Insignia embroidered patch for your rocker jean jacket and a set of four 2.5″ Brushed Silver stickers featuring art from Consolers of the Lonely.”

Fans are encouraged to join the Third Man Vault prior to October 31st to ensure a copy of Consolers of the Lonely: 10 Year Anniversary Special Edition.

Initially planned as a surprise release – a surprise ruined in part by Rolling Stone, and then iTunes – Consolers of the Lonely was Jack White and Brendan Benson’s follow-up to 2006’s Broken Soldier Boys. However, since a partial reunion during the encore of Jack White’s Nashville concert in 2015, the Raconteurs have been inactive as White focused musically on his solo work and recording with Dead Weather. 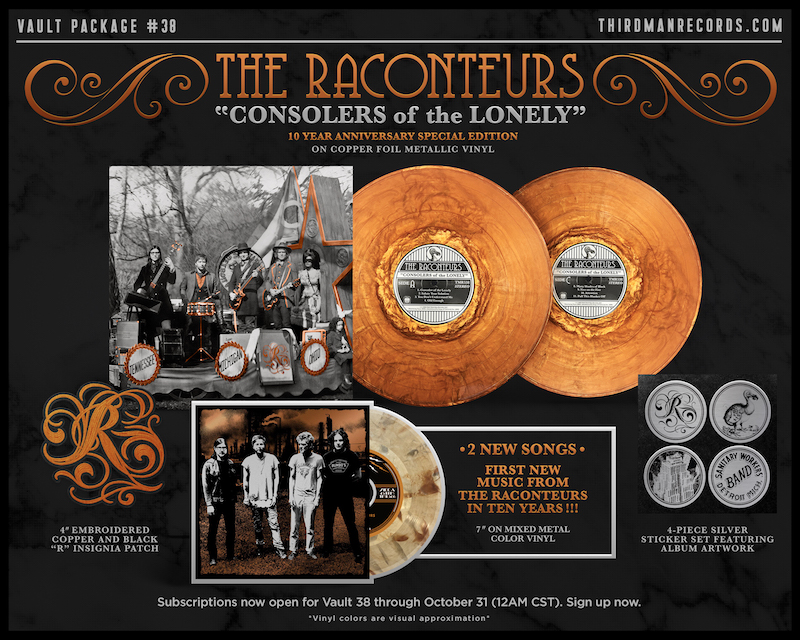