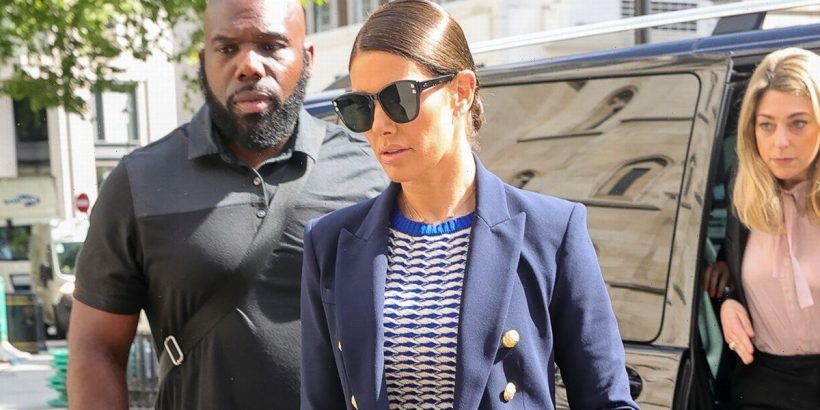 Rebekah Vardy left the courtroom crying after a tense exchange with Coleen Rooney's barrister during their libel trial.

David Sherborne, for Rooney, had been questioning Vardy about one of the fake posts Rooney posted on her private Instagram account as part of her Wagatha Christie sting.

Mr Sherborne misspoke and said it was Vardy who had "gone to Mexico to look at gender selection" to which she responded: "It wasn't me who went to Mexico, it was Mrs Rooney."

The lawyer said: "Is that your best point?"

Vardy's lawyer Hugh Tomlinson QC then stood up and said: "Mr Sherborne keeps making remarks and if the witness is in the box for a long time it can be unpleasant."

Mrs Justice Steyn, who is hearing the trial, said: "It is unnecessary."

She added the court did "not have time" for the remarks and cross-examination resumed for a few seconds before she asked Vardy if she wanted a break.

Vardy nodded and grabbed a handful of tissues before leaving the courtroom for several minutes.

She put up a photo of the back of an aeroplane seat captioned: Let's go and see what this gender selection is all about.''

Vardy said: "No.'' whilst Sherborne said only Vardy's account saw it.

Vardy said: "That's what it says but I don't recall seeing this.''

Sherborne suggested she screenshot the image and forwarded it to Caroline Watt to pass on to the newspaper.

No, that's not true,'' she replied. Vardy accepted she had known from other Rooney posts she had been to Mexico.

A story later appeared saying Rooney had flown to Mexico to look into gender selection.

Sherborne asked: "You are the only person who could have been responsible for that article?''

Vardy: No that's not true. I can't recall ever seeing the gender selection post.''

Sherborne said no message existed between Vardy and Watt about the gender selection post because it had been deleted.

Vardy said: "I didn't delete my messages. Something happened as I was exporting them to my legal team.''

Mr Sherborne said the message was not available from Watt's phone either because it was at the bottom of the North Sea'.

Vardy's lawyer Hugh Tomlinson QC complained to the judge Mr Sherborne was commenting on her evidence.

The judge ticked him off saying there was no time' for such comments.

She has previously posted that she was in Mexico.

Vardy then returned to court and the case continued.

You can also follow us on Twitter @Daily_Star to get the latest news updates 24 hours a day.