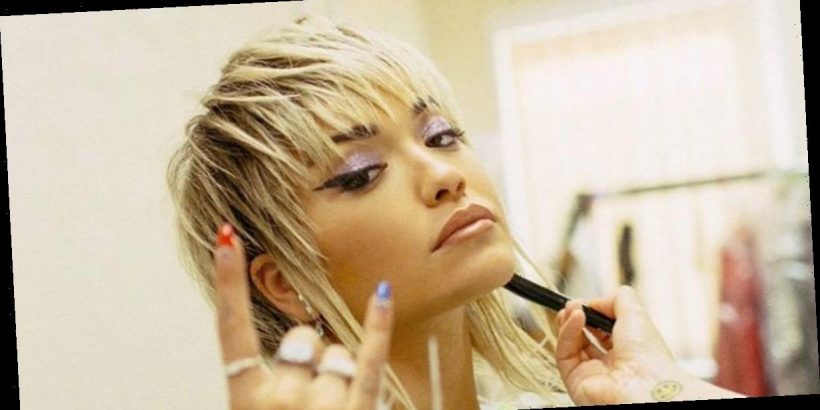 Rita Ora took to Instagram ahead of Saturday's episode of The Masked Singer to reveal her outfit for the ITV show.

The 30-year-old singer showed off her slender pins as she shared a couple of selfies on her Instagram Story.

In the first snap, Rita pulled a serious face as she gazed into the camera while wearing a glitzy dress which features a silver, green and yellow pattern.

The minidress also featured white feathers and allowed the Hot Right Now hitmaker to show off her tanned legs.

In the second photo Rita was having her make-up done by a professional as she made the sign of the horns gesture to the camera.

Her make-up looked immaculate and features lilac eyeshadow and black winged eyeliner, and she accessorised her look with a thick chain necklace and several rings.

Her snaps come after she was branded "selfish" at a council hearing earlier this week regarding the illegal 30th birthday bash she held at Casa Cruz restaurant in London in November.

The pop star has previously apologised for her “spur of the moment” decision to throw the celebration, which broke Covid rules, on November 28 last year.

At a Kensington and Chelsea Council licensing sub-committee hearing on Thursday, police urged the authority to revoke the licence of the restaurant where the party was held.

At the meeting, Charles Holland, a lawyer representing the police, hit out at Rita as he argued the restaurant should lose its licence following the incident.

He said: "The incident on the night was one of the most egregious and certainly the most notorious, breaches of the regulations committed on licensed premises."

He added that Rita "selfishly wished to flout the lockdown" by seeking to pay for access to the Notting Hill restaurant.

The hearing also heard how Rita's representatives allegedly contacted the supervisor of the restaurant on the day of the party to ask if it could be held there.

Gary Grant, who represents Nicholas Fallows, the director of Casa Cruz, told the hearing that the party was originally due to be held at the home of one of Ora's associates.

He said that the singer decided not to hold the party at the home after paparazzi photographers turned up at the property.

He said her representatives then contacted Scottie Bhattarai, the manager of Casa Cruz, in "desperation" and asked if they could hold the party there if they paid him a £5,000 fee.

A decision on whether the restaurant keeps it licence is expected to be made next week.