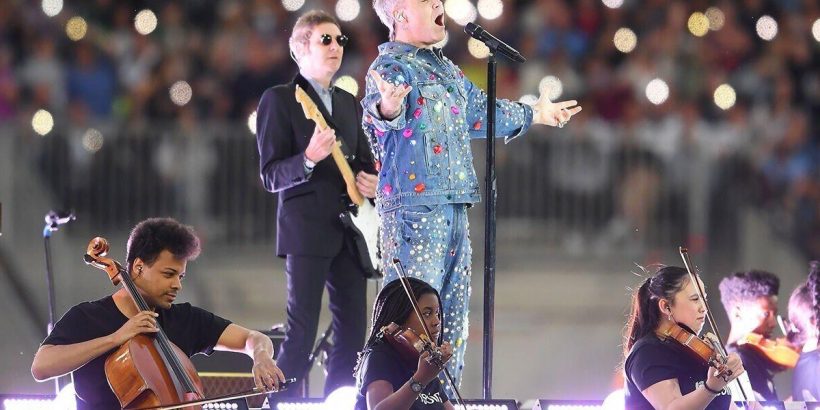 It’s been a quarter of a century since Robbie Williams embarked on a solo career after leaving Take That in 1995. The 48-year-old, who sang Angels for Soccer Aid 2022 last night, will be hitting London’s The O2, Birmingham, Manchester, Glasgow and Dublin this coming October. Here is the full set of his 2022 UK tour dates:

Treat yourself or some loved ones to an unforgettable experience with Ticketmaster. Whether you’re a football fanatic, a lover of live music, or partial to a theatre production – there’s something for absolutely everyone on Ticketmaster.

This box contains affiliate links, we may receive a commission on any sales we generate from it. Learn more.

Robbie’s XXV UK and Ireland tour coincides with the release of his new album of the same name on September 9.

His latest record will include orchestra versions of his most famous tracks from Feel to Strong.

The former Take That star recorded these with Netherlands’ Metropole Orkest. Additionally, the deluxe version of the album features four new original songs.

This includes a track called Lost, which is a Gallagher-like ballad featuring the lyrics: “I lost my place in life/I lost my point of view.”

Speaking with NME, Robbie said of Lost: “It’s the same sort of song that Feel was when that came out back in the day. I’ve got big hopes for it.”

Fans who pre-order the star’s upcoming new album XXV by 3pm tomorrow will have access to purchase pre-sale tickets on Wednesday June 15 from 9am for up to 48 hours.

Tickets for Robbie Williams’ XXV tour will then go on general sale from 9am on Friday June 17 here.