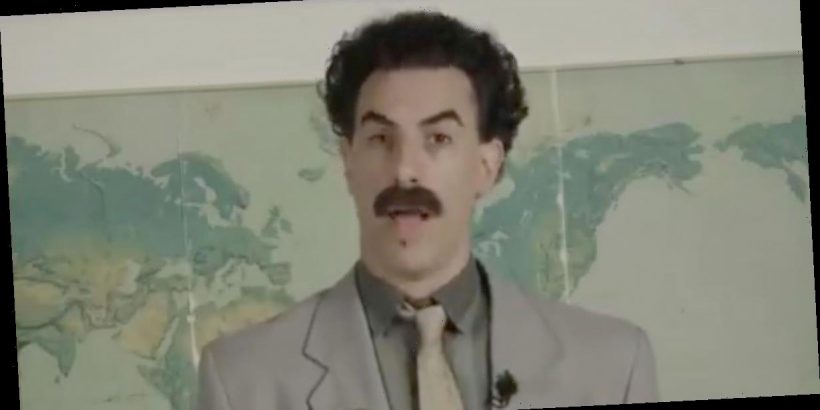 Sacha Baron Cohen has revealed that despite his Golden Globe double victory for Borat – the character is being retired.

The Londoner is done with saying “Jagshemash” after admitting that this latest movie was the closest he came to being killed.

Borat bagged his double of Globes best motion picture, musical or comedy and best actor in the same category, but won’t risk his life again to get laughs as the Kazakh reporter.

The star is retiring the Kazakhstan reporter following two hit films and TC show, as threats became too real “which is why the grey suit is locked up and not coming out again.”

He insisted his sole purpose for reviving Borat was the 2020 US election “to encourage people to vote for Biden and not vote for Trump.”

But that experience included him almost being lynched during a right wing rally and a security guard stopped a rally attendee from firing a gun at him.

Baron Cohen confirmed: “It was fantastic that we managed to make this movie, but I cannot count on luck all the time.

“I am extremely happy how it turned out, but no I will not be revisiting Borat hopefully ever again.

“And as much as it was exhilarating to make this movie, this was the most dangerous movie I have had to make.

“Being chased and hiding surrounded by gun toting protesters trying to pull me out of the ambulance.

“I came close (to death); somebody pulled a gun.”

He continued that even making the film, he felt it was the end of the line:

“I felt I had to do anything I could to remind people of what, in 90 minutes, in a humorous way, of what Trump had done the prior four years, and I felt I had to try and infiltrate his inner circle.”

He added that the aim was to “create a much more emotional movie than we had ever done before.

“Make no mistake, this is hard work and no different to inhabiting the character in any other film I have done.”

Want all the latest shocking news and views from all over the world straight into your inbox?

We've got the best royal scoops, crime dramas and breaking stories – all delivered in that Daily Star style you love.

Our great newsletters will give you all you need to know, from hard news to that bit of glamour you need every day. They'll drop straight into your inbox and you can unsubscribe whenever you like.

Baron Cohen made two speeches, taking swipes at Trump and his backers, when accepting his gongs.

He said: “I’ve got to say, this movie could not have been possible without my co-star, a fresh new talent who came from nowhere and turned out to be a comedy genius…I’m talking about Rudy Giuliani. I mean, who can get more laughs out of one unzipping? Incredible.”

“Our movie was just the beginning for him,” Baron Cohen continued.

“Rudy went on to star in a string of comedy films. Hits like ‘Four Seasons Landscaping,’ ‘Hair Dye Another Day,’ and the courtroom drama ‘A Very Public Fart.’”