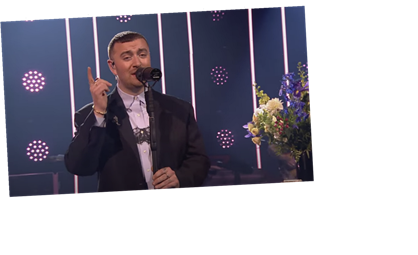 For the emotional performance, Smith was joined by a full band and three back-up singers, with vibrant purple lights illuminating the stage. This is the second time Smith has showcased the sultry track on TV, after previously performing “Kids Again” on The Late Show last fall alongside “Diamonds.”

Smith was scheduled to release their third album, originally titled To Die For, last June, but the album was rescheduled and renamed due to the Covid-19 pandemic. Smith dropped the album in October and followed it with a new Christmas song, “The Lighthouse Keeper,” last November.

“I am sorry it’s taken a while,” Smith said in a statement about the album. “But these unprecedented times gave me the room and space to fall in love with these songs all over again. After it all, I still believe love is the answer. And with love in our hearts and kindness in our words and actions, we sing on.”