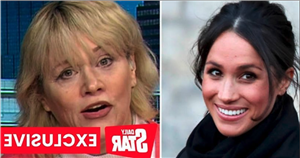 Meghan Markle's sister Samantha has pleaded with the former Suits actress via a banana to make contact with their dad who recently suffered a stroke.

Former Hollywood lighting director Thomas Markle has been left unable to speak but is surrounded by his son, Thomas, 24 hours per day.

Now Samantha has issued a plea to her sister exclusively via the Daily Star after the bold image of Meghan writing messages on bananas to sex workers.

Meghan wrote phrases including "you are brave" and "you are strong" on the yellow fruit during a visit to the One25 charity in Bristol, which delivered food packages to sex workers. Now, Samantha has used the same tactic and hopes that by writing on a banana, she can grab the attention of her younger sister.

She penned: "Call dad" on the bright yellow fruit in a picture exclusively given to the Daily Star.

Despite claims Meghan has attempted to contact Thomas, Samantha instantly shut these down, saying: "My brother and I know up to the minute, we're in contact 20-25 times a day and my brother is with dad.

"She has not reached out to dad, his phone number has not changed, Tom is with my dad around the clock.

"I talk to my dad by text and talk to Tom 20 times a day, there has been no reach out an effort from Meghan whatsoever – not true at all.

"All things considered, there has been nothing stopping her, PR pieces said she wanted to reach out privately, without her siblings being in the way."

Reflecting on Meghan's bold claim, Samantha said: "That's funny because she told Oprah she had no siblings, so there's a paradox. There's no excuse for her not being there. "If she can travel to Texas to have cameras in tow and photographers, over the massacre of 20 children, there's no reason she can't get a couple of hours to visit my father.

"Montecito is not that far away from him – all things considered, there is no excuse for not texting him or for not visiting him. The siblings are not in the way, we've always encouraged her to reach out she knows how to do that."

Thomas had planned to jet to the UK for the upcoming Platinum Jubilee Celebrations and had hoped to join the millions of royal fans lining the streets of London. It would also mark the first time Meghan would have been seen in public in the UK since stepping down as a senior working royal in January 2020.

Despite previously claiming it was unsafe to travel back to his homeland, Prince Harry, Meghan and their two children will be jetting into Blighty this week.

Although, the couple will not join the Royal Family during their famous Buckingham Palace balcony appearance – with the Queen restricting access to just working royals.

For more of the latest showbiz news from the Daily Star, make sure you sign up for one of our newsletters here.