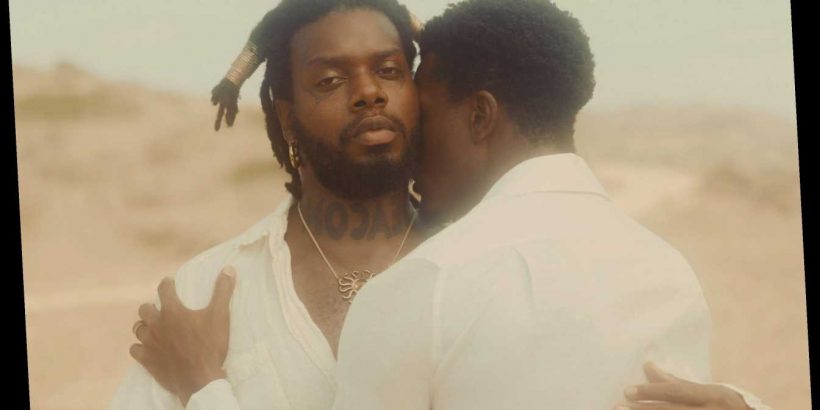 Think back to the fourth season of HBO’s sui generis crime drama The Wire. It’s all about the finer points of Baltimore machine politics. Mayoral hopeful Tommy Carcetti, a loquacious, know-it-all councilman from the city’s South Side, visits the parish of a kingmaking West Side minister. Carcetti scans the church cautiously, unsure quite what to do with himself.

Baltimore soul troubadour Serpentwithfeet wouldn’t have that problem. The church is his home turf. And his glow-getting new album, Deacon, is a testament to God’s saving grace.

At 32, Serpent, real name Josiah Wise, is learned enough to write an encyclopedia about the history of Black American expression. Wise’s music serves as a guidepost through its peaks and troughs, R&B-adjacent, but not quite R&B. “I look at R&B as a prism, a window, a portal,” Wise said in a recent Zoom call. “I do think I fit within the R&B canon. It’s my natural cadence.” His is a microgenre derived from hymns, spirituals, extemporaneous field hollers — every tool in the enslaved Black man’s toolbox. Where else but the church could Wise have received this education?

“My parents met in church,” Wise says with a chuckle. “My brother played in the band. My mother was choir director when she was coming up. My father played the washboard. I spent at least three or four days a week in church.”

Wise grew up in Baltimore, a shrimpy theater geek whose parents “mainly” played gospel in the house, but you wouldn’t know it from hearing him talk. His accent, such as it is, is liltingly neutral and regionally nonspecific. Only when he pronounces the word “to,” pushing that last letter to the front of his tongue, do Wise’s Baltimore origins manifest.

But variety is the spice of Deacon. It’s also a virtue that Baltimoreans live by. Much has been made of Wise’s classical music background; that’s only part of a larger story about his cosmopolitan palette, and how it came into being. As a child, Wise, like so many in Baltimore, was taught balance across eclectic food groups.

“I was schooled in the tradition of Black folk music,” Wise says. “And jazz music. And, you know, singing gospel and doing hymns in church. Between church choirs and concert choirs, there’s a wonderful choral scene in Baltimore. I was exposed to so much at such an early age. I had the best of so many worlds. So when I decided to start writing original music, I was trying to synthesize all that I had learned.”

After high school, Wise attended the University of the Arts in Philadelphia. But a schism between mind and heart had been wrenched open. Subconsciously, Wise may have been torn between the trappings of his youth and the tug of his burgeoning sexuality. Even if he was no longer physically present at church (“It was time to take up space differently,” Wise says), the call to worship was always within earshot.

“I think of the church and the institution of church as a place for a certain kind of discipline. I actually don’t know any scriptures,” Wise says with a laugh. “I know a lot of gospel songs; I could tell you a Kirk Franklin lyric in a heartbeat! But it was a wonderful community. I’m still in touch with many people from the church I grew up in. I still consider them family.”

For Wise, the unconditional nature of God’s love was never in doubt, but he sometimes received mixed messages from family. On “Same Size Shoe,” he relays a mortifying — but dubiously veracious — conversation with a churchgoing relative stuck in her ways. (“A lot of Deacon is factitious,” Wise says. “I don’t want any of my aunties coming for my neck.”)

Wise made tons of music in the years that followed. He also moved to New York City: “It schooled me. I only have a bachelor’s officially, but New York gave me a master’s in life. New York has a lot of lessons if you’re open to them. I don’t think I could even recognize the wonder in my life without my many, many teachers in New York.”

Much of this music was beautiful. Most of it hinged on themes of self-dislike and self-sabotage. His 2018 debut, Soil, wasn’t strictly autobiographical. Even so, it revealed a nebbish, needy person given to misguided acts of self-sacrifice. The songs were creepily, imperturbably still, as though Wise were too devoted to a singular person to notice the outside world. In other words, too devoted for his own good.

Which brings us to Deacon, an album of syncopated club rhythms, twinkle-toed keyboard arrangements, and mellifluous, silhouetted vocals. Wise has an opera singer’s command of vibrato and tremolo. He may be in total control of his instrument, but his head is all swimmy. “Blessed is the man who gambles!” Wise rhapsodizes on “Malik.” “Blessed is the man who wears socks with his sandals!” There’s no getting around it: Wise is madly in love, presumably with the telegenic boyfriend who has co-starred in some of his videos.

“My intention was to make an album that is a love letter to gay Black men,” Wise says. “It’s a love letter to all of the men that make the world a more colorful and rewarding place to live in. Because I’ve already talked about some of my dissatisfactions in past music, I wanted to go on the record as saying, ‘I’ve loved and been loved. Let me count the ways!’”

“Amir” is about the giddy early stages of courtship. Wise peppers the titular baddie with half-teasing questions. (“Do you like beer or like rosé? Do you slow dance or do you rush?”) It’s the most infectious song of Wise’s young career, but don’t ask him to make it Deacon’s next single. That would be infringing on his process.

“Derrick’s Beard” and “Heart Storm” are further proof that the anomie of Wise’s past has given way to a satisfying present. “Fellowship” sounds a little like Naija pop, but Wise found spiritual equilibrium right here, not in his ancestral homeland. All he had to do was grow up a little.

“When I got to my thirties, a self-acceptance took place,” Wise says. “I no longer felt like I was doing life wrong. It was like, ‘This is me. This is my pool of information. These are my skills. These are my weaknesses.’ All of the silly questions of my twenties — ‘Am I cracking the right jokes? Am I wearing the right shoes?’ — I just don’t have anymore.”

That wisdom extends to the past year living amid a pandemic, and life under lockdown has been good to Wise. He doesn’t even miss live music. “I’m just trying to be present at the moment,” Wise says. “I’m thankful that people are finding ways to have fun. And I don’t want to miss out on the gems because I’m reminiscing about when I could tour two years ago. Touring might be even more dynamic when it returns. It could be something better than we thought possible.”

“I’m grateful for what we have,” Wise continues. “People are hella inventive.” Preach!