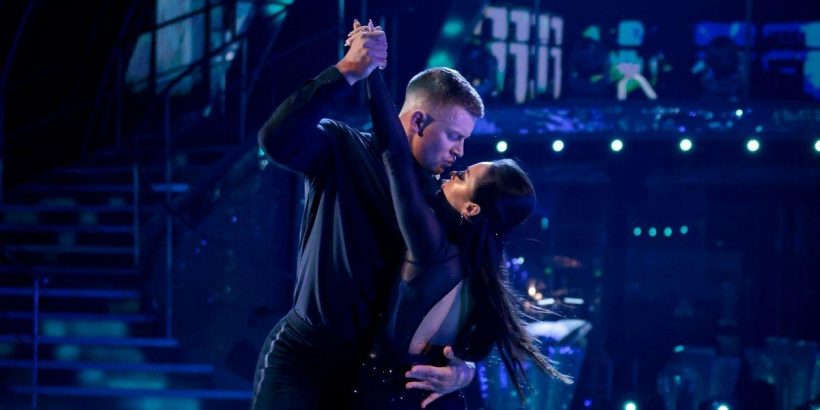 The 32-year-old has opened up about her relationship with the Olympic swimmer following their saucy tango over the weekend which has left viewers gobsmacked after their sexy Argentine tango.

The competitive couple certainly made sure to come back with a bang after their disappointing score last week which almost saw them in the bottom two.

In an interview with HELLO! Magazine, Katya shared Adam’s ability to form a “connection” with his dance partner as they progress onto next week’s show.

She told the publication: “I’ve worked with athletes before and they’re always prepared but I remind Adam that everyone else is doing 40 to 50 hours a week too and putting in 100 percent and it really shows.

“It’s not just about the steps and hard work; it’s also the connection and the feeling you leave people with.

“You don’t just do the steps; you’ve got to perform them,” she explained.

It comes after the pair shocked viewers with their passionate routine in which dad-of-one appeared to “lean in” for a kiss as viewers watched the awkward blunder on telly.

But Strictly fans weren’t the only people who tuned in for the live show, as Adam’s loving girlfriend Eiri Munro responded to the controversial moment on TikTok that evening.

The brunette beauty pretended to cry in the short online video, and wrote atop of the clip: “Watching your boyfriend almost kiss another woman on live TV.

She later threw her head back in mock anguish as she added a second caption which read: “Finding out 10 million people also watched it live.”

Since then, the Olympian has slammed “gossip” surrounding the scandalous routine as the dancing duo prepare for another week on the iconic dancefloor.

The doting dad set the record straight for loyal viewers at home in a lengthy post on Twitter after the show on Sunday.

He wrote: “My favourite dance so far. Thank you to everyone who has sent supporting messages! I loved it.

“To everyone who wants to see what they want, your comments have real life consequences.

“I will not be overcome or lowered by your gossip. Protect your energy.”