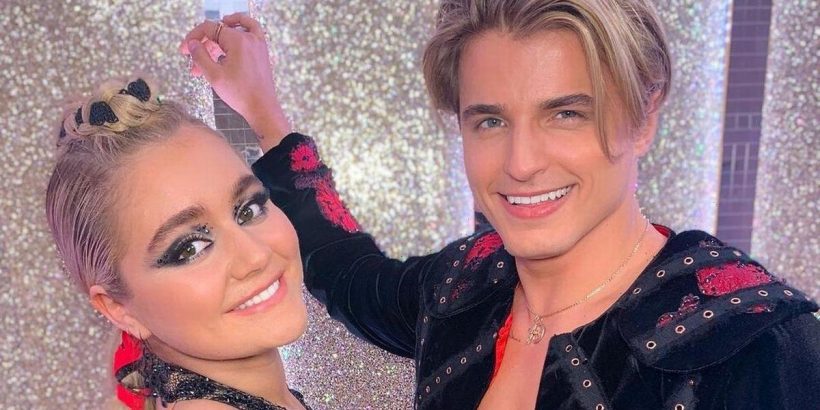 Tilly Ramsay called Nikita Kuzmin "super cute" as they trained for their next routine on Strictly Come Dancing.

Gordon Ramsay's daughter Tilly, 19, was rehearsing with the tango with her professional dance partner Nikita ahead of the next live show on Saturday night (November 6).

Tilly and Nikita sailed through to the next week of the hit BBC show after impressing the judges with their Cha-Cha during Strictly's Halloween show on Saturday (October 30).

Tilly and Nikita managed to bag an impressive 35 out of 40 with the routine, which meant it was back to training this week.

However, as hard as she'd been working during the competition, Tilly couldn't resist poking a bit of fun at her dancing pro who she's become close friends with.

Taking to Instagram Story, Tilly shared a video of Nikita donning a comically-long nose which had been edited in by Tilly via a filter.

Focusing the camera on Nikita, she attached the caption: "Looking cute @nikita__kuzmin".

Nikita was giving an update on how their tango training was going, but he didn't seem to realise his nose had been a cartoon-style makeover by Tilly.

It meant Tilly was rather distracted as Nikita said: "It's going alright, I think it's the biggest challenge so far which we've had."

She could then be heard starting to laugh as he went into more detail about how "difficult" the routine is.

Tilly then burst out laughing as she said: "Cute", calling him "super cute" in the next caption.

It seemed like the penny finally dropped for Nikita as he started chuckling too, adding that he was "really excited" about the dance.

Although there have been rumours of a romance flying between the two, it appears Tilly and Nikita are simply great friends.

Tilly's Dad Gordon sent in a special message to the pair on Saturday's Halloween special.

In the clip, he said: "Tilly, Nikita, it's your dad, dancing instructor extraordinaire. That performance was exceptional, and then I think about the 45 to 50 hours this week that you've put in training. Honestly, that cha-cha-cha, Nikita, that's what you and I have been discussing all month long.

But the 54-year-old father-of-five couldn't resist chucking a bit of banter Nikita's way for showing too-much skin on the dance floor.

He said: "One little issue, Nikita, you and I have been talking for many months now. You know Frankenstein always has his top button done up. Come on, man. Get rid of the six pack. It's a family show. Really?"